What Vegan Strongman Patrik Baboumian Eats in a Day

For a long time, the belief that you had to eat your meat to be the strongest man reigned supreme.

The idea of a vegan ​strongman was a joke until news, pictures, and posts about Patrik Baboumian started going viral on social media.

This German heavyweight walks the walk and talks the talk.

He has won powerlifting competitions (see powerlifting exercises) around the world and ​has a world record as Germany’s Strongest Man. Currently. He uses his social media platform and many documentary appearances (see also ‘Bad Vegan: Review‘) to popularize and promote his plant-based diet and the veganism lifestyle that made him the vegan strongman.

​Who Is Patrik Baboumian 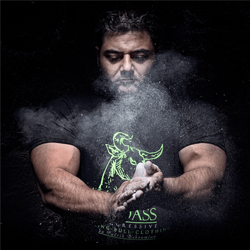 Born in Iran, Patrik moved to Germany when he was a young boy. He became interested in weight training at the age of nine, which led to his bodybuilding career.

In 1999 at the age of 20, he made a name as the champion on his first competition at the IFBB Junior Bodybuilding Championship. He has been vegetarian since 2005 and became a vegan in 2011 [1].

He also held the German heavyweight log lift world record at 180kg (400 pounds) and the title of Germany’s strongest man in 2011.

In 2012, he became the European Champion in Powerlifting Class -140 kg division.

​He has continued to break, set, and maintain world records and he has won numerous titles and accolades since 1999.

Baboumian decided to go vegan in 2011 after many years as a vegetarian. The decision to make such a dramatic change was not easy, primarily due to its potential impact on his chosen career.

He made the change due to reasons of compassion and to escape the hypocrisy; he could not kill an animal, and so he couldn’t justify having someone else kill the animals for him.

​This is a message to all those out there who think that you need animal products to be fit and strong. Almost two years after becoming vegan, I am stronger than ever before, and I am still improving day by day.

Not content to stop eating meat, Patrik made the switch to go full vegan because he saw the cruelty in the dairy industry as just as bad, if not worse than that of the meat industry.

There is no denying that this is a big change in the image of strongmen. But, he has even gone on to encourage countless other thriving elite vegetarian athletes (see also our article on vegan boxers) to go vegan too. Patrik, as a vegan strongman, is a fierce advocate for plant-based protein, and his gentle, compassionate, and considered opinion on the subject is surprising for a strongman.

​What Patrik Baboumian Eats In A Day

You can imagine there is a lot of interest in what Patrik, a strongman vegan, eats on a daily basis to maintain his muscle and gain (See SARMS results) his strength that made him won numerous world records. However, ​he has always been quite reluctant to share the exact details.

This is because his diet menu is always in flux, it changes to suit his goals and whether he’s looking to shed or shred.

In the video, the Baboumian takes us through a day in his life, and we get to see what he eats.

There is a lot of protein powder and shakes, with 4 of his meals being different blends. He says this is to help his digestive tract digest well, which goes to show that vegan protein powder is much lighter on the tum than whey.

For his solid foods, we seem him consuming mountains of fresh, grilled veggies, lots of potatoes for carbs, and protein meat replacements like veggie sausages, falafel, and tofu. Later on, he shows off a “light snack” of a heaping bowl of peanuts.

​Controversies around the Vegan Strongman

Some of Baboumian’s detractors claim that because he won his first championships in powerlifting (see also ‘What is a Good Wilks Score?‘) without the vegan diet, he has somehow cheated.

They say that he can’t claim to be the strongman that he is due to his veganism lifestyle, because the base was built with animal products. It’s a ridiculous claim, especially as most of the records he holds were achieved decades after being vegetarian, and years into his full vegan diet.

Also, ​a competitor of the World’s Strongest Man, Robert Oberst, made a statement that every strongmen eat meat and rice and that no one’s vegetarian. He also added that Patrick is not considered as one of the strongest men in the world though he may be strong.

This statement from Robert Oberst was immediately answered by Patrik, showing how he is legit part of the game. Whatever the detrators say, the fact remains that Patrik Baboumian is one of the top vegan athletes on the planet and vegan or not one of the most impressive strongmen to compete.