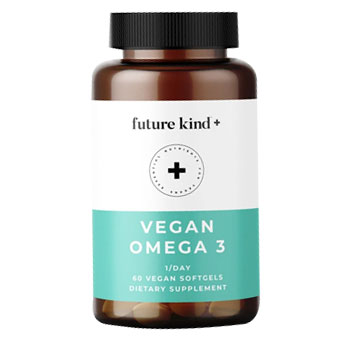 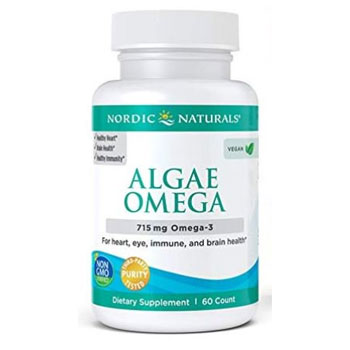 Just because tuna's not on your menu doesn't mean you can't have all the benefits of Omega-3.

Omega-3, while mostly found in fish oil, is actually also present in significant levels in many plant foods, such as chia and hemp seeds, as well as algal oil.

There are plenty of options for plant eaters who want to ensure an adequate intake of Omega-3, and all of the ALA, EPA and DHA (more on these later), without wrecking the fish population and ingesting toxins and pollutants.

Just remember that not all supplements are equal, so we will focus on those that aren't packed with questionable ingredients and fillers.

Below is a list of the best vegan Omega 3 supplements.

Future Kind Vegan Omega-3 supplement is a brand that relies on one particular review published in the Journal of the American Medical Association. Essentially, that review compares fish oil to snake oil, stating that it does little to nothing in treating cardiac health.

Instead, they have turned their gaze to algae, which is where the fish get their Omega-3 from in the first place.

By going straight to the source at the bottom of the food chain, vegan users will not have to worry about pollutants and microplastics (not to mention the overfishing of our oceans).

Super Omega Pure Algae Oil claims to be a DHA oil because despite only having 350mg of DHA (not the highest on this list), it is said to be the most potent. This means that its effects on the body can be observed right away.

The algae-based oil is perfect for vegans -- plant-based, effective, and no fishy aftertaste.

It’s also BPA and GMO-free, and doesn’t contain any artificial additives or sugars. It contains tocopherol as an antioxidant, so you get the antioxidant benefits on top of the DHA.

Super Omega could’ve been perfect if  it has at least 500mg of DHA.

Is fish oil vegan? No, but algal oil is.

Nordic Naturals is a Scandinavian omega-3 vegan product that is derived from algae.

You see, you don’t need to consume fish-derived oil – algae is a potent vegan omega-3 source in its own right.

These essential acids can be otherwise hard to come by for plant-eaters. Nordic Naturals is indeed packed healthy omega-3 fatty acids. 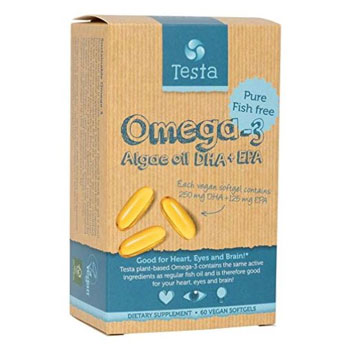 Testa is one of the best vegan omega-3 supplements on the market, featuring more than 250mg of DHA and 125mg of EPA allowing you to lead a healthy and sustainable plant-filled life.

This product is renowned for its purity, featuring no contaminants which can harm your body.

In addition, it doesn’t contain fish-derived oil, a product that is responsible for killing 27% of fish around the world!

Perhaps one of the good things about Testa is that it doesn’t give you that nasty fishy breath that you get with certain algae products. 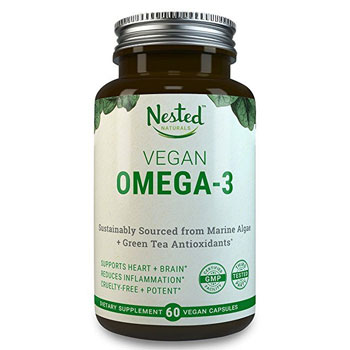 Nested Naturals Vegan Omega-3 will take care of your omega-3 needs with ease.

What I like about this particular product is the minimalistic approach to the ingredients used. If you look at the nutrition label, it's quite uncluttered; there's nothing there that doesn't have to be there (and also free from carrageenan).

I also like that they've opted to use a natural antioxidant to preserve the omega-3 fatty acids; each serving contains 100 mg of green tea extract.

The algae oil is derived from marine algae grown sustainably on a farm, not harvested from the ocean, meaning that you get a pure and high-quality supplement. Third-party testing further ensures there's no contamination or other toxins present.

Now on the flip side, the simple ingredient list means there is nothing to mask the fishy/seaweedy/oceany flavor - which might give it a not-so-pleasant smell. However, if you prefer a no-frills, basic omega-3 supplement, then this is something you should consider.

The pills are quite large, 2.5 cm long and 0.7 cm, wide, which is a downside for those that struggle with swallowing large pills. 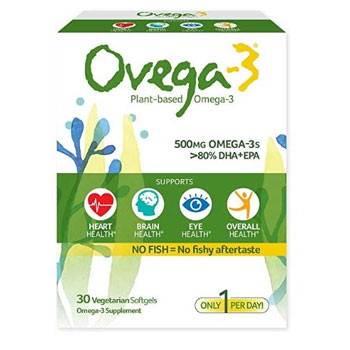 Ovega-3 Vegetarian/Vegan Omega-3 is a popular cruelty-free supplement to get your precious plant-based acids.

One of my favorite things about this product is that each serving contains a heaping 270 mg DHA and 135 mg EPA - which is a very good dosage for the long-chain omega-3 fatty acids.

This supplement delivers high quality, sustainable omega-3s without a fishy aftertaste or the risk of ocean-borne pollutants and toxins. It also contains rosemary extract and antioxidants such as vitamin E and C to prevent oxidation.

However, what makes this product less attractive is that it contains seemingly unnecessary ingredients such as corn starch (?), beta carotene, sorbitol, and caramel color.

It also contains the somewhat controversial ingredient of carrageenan, which may bother some people. Users report that the pills are quite large but still easy to swallow, with no mention of the "fishy burps" that some products cause. 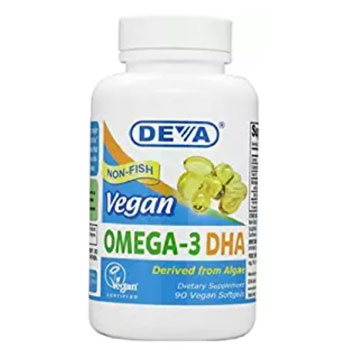 Coming in at an affordable price, DEVA Vegan omega-3 vitamins are soft-gel vitamins containing approximately 200mg of algae each.

These pills contain a large amount of DHA, helping you to consume the fatty acids that your body needs to thrive and survive.

DEVA Vegan is known for making high-quality supplements, and their entry for omega-3 is made from clean and safe ingredients.

It is also free from ocean-borne contaminants which may harm your overall health. 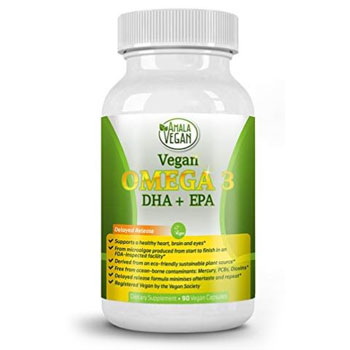 As this vegan multivitamin is made from an eco-friendly and sustainable algae-farm, it results in a product free of toxins such as mercury, PCBs, and dioxin.

It features a delayed-release formula and natural lemon and peppermint flavors, helping to avoid the fishy aftertaste and "seaweed" burps. It also contains rosemary extract and antioxidants such as vitamin E and C to prevent oxidation.

This product is free from the controversial carrageenan and presents a relatively clean nutrition label.

Users report overall good experiences and that the peppermint flavor effectively conceals any fishy burps. One negative is that one serving doesn't provide a particularly strong dose of omega-3s – there’s about half when compared to other brands.

However, you do get 90 pills in a container, so you could just up the dosage to 2 pills. 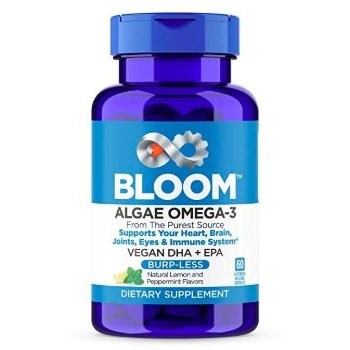 Each serving provides plenty of these crucial nutrients: 336 mg DHA, 158 mg EPA and, 36 mg of DPA. So what stands out immediately is the large amounts of omega-3 fatty acids - which is great.

Noteworthy is also the inclusion of docosapentaenoic acid (DPA) - an elongated form of EPA. While the focus often revolves around the health benefits of EPA and DHA, research suggests that DPA can help prevent blood clots and wound healing, as well as reduce inflammation.

Bloom omega-3 is made from farm-raised non-GMO algae and processed in a GMP certified facility which ensures quality and purity. You can rest assured that this supplement is free of any ocean-borne toxins, pollutants, and contaminants.

As they’re derived from farm-raised algae and include natural lemon and peppermint flavorings, these won’t give you the dreaded “seaweed/fish burps." The ingredient list is also super clean and is one of few algae-based supplements that don't contain carrageenan. Vitamin E is added for its antioxidative powers.

Users report good experiences with no "fish-burps" or any other issues with digestion.

Other Supplement you May Want To Check Out:

According to a fascinating article by Vice, it is essential that vegans take omega 3 pills. In fact, it’s necessary that EVERYONE gets enough omega 3 in their diet. You see, the average American diet is absolutely drenched in omega 6, but omega 3 is nowhere to be found (1). Especially as a vegan, you have to make sure that you're eating enough plant-based sources daily to meet the required omega-3 dose.

There are 3 kinds of omega-3 fatty acids – eicosapentaenoic acid (EPA), docosahexaenoic acid (DHA), and alpha-linolenic acid (ALA). EPA, DHA, and ALA all help the body through their numerous health benefits.

Though some people think of nuts and seeds as a vegan omega-3 source, they only contain ALA, which means they’re missing out on the huge health benefits of both EPA and DHA. The best vegan omega 3 supplement should contain all three.

As a result, vegans  must consume algal oil – supplements made from algae. These algae are the sources of DHA and EPA that fish eat and what makes fish-derived oils so rich in omega-3 in the first place!

As fatty fish and seafood with preformed EPA & DHA are off-limits for us vegans, our levels of these long-chain omega-3s are often lower when compared to omnivores, as we mentioned.

This is quite alarming, seeing as DHA and EPA are responsible for some of the profound health benefits of omega-3:

So what do we do?

Are we vegans doomed to live our lives with poor intakes of omega-3s?

What to Look For in a Quality Vegan Omega-3 Supplement

What Ingredients to Avoid

Why Fish Oil Is a Pretty Bad Idea for Omega-3

Many fish-derived oil supplements on the market are oxidized, or to use the colloquial term, rancid (10).

It’s no wonder seeing as the fish first has to be caught and then transported to shore where it's then fractionated into oil, stored in large tanks, and shipped away to a factory for further refining, this refining process involving several steps including repeated heating at high temperatures and deodorization in order to remove undesirable taste and rancidity.

So, as a consumer, you've more or less no idea where the oil originally came from, how old it is, and how many steps of refinement and heating it has undergone.

Furthermore, there's one more problem with this oil:

Fat-soluble pollutants, such as polychlorinated biphenyls, may biomagnify in marine food chains and may end up in concentrated amounts in your fishy oil supplements (11).

Is Vegan Omega-3 as Good as Fish Oil?

Vegan Omega-3 is not as good as fish oil in terms of potency, although algae-derived algal oil is nearly as potent as fish oil and is 100% vegan. This is because fish become rich in omega-3 by eating and digesting these algae, which is rich in EPA and DHA essential fatty acids itself.

How Much Vegan Omega-3 Should I Take?

According to the International Society for the Study of Fatty Acids and Lipids, adults should take 500 mg of vegan omega-3 fatty acids every day. This means that your total consumption of DHA EPA and ALA essential fatty acids should amount to around 500 mg every single day.

True vegans cannot consume fish oil pills as they contain animal-derived ingredients. However, they can take oils derived from algae, which feature very similar levels of omega-3 in its vegan DHA and EPA forms. Algal oil allows vegans to consume their intake of omega-3 without consuming fish products.

Out of all the reviewed products, we would recommend Future Kind Vegan Omega-3 as the best vegan omega-3 supplement.

What is interesting about Future Kind is that they have produced a Vegan Omega-3 supplement made entirely from algae. Look at it this way: this is where the fish get these essential fatty acids from in the first place.

By going straight to the source at the bottom of the food chain, customers won’t have to worry about ingesting pollutants. Not to mention the overfishing of our oceans. David Attenborough would attest to that!

But most importantly, the softgel capsules are just the right size and easy to swallow.

What vegan omega-3 supplement have you tried? Got any experiences you’d like to share? Let us know in the comments below.