B12 Dosage for Vegans 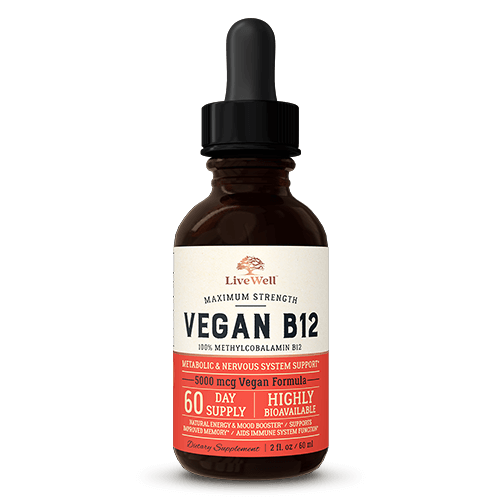 B12 Dosage for Vegans

Vitamin B12 is one of the most important nutrients that plays a role in a person’s health, including the health of vegans. Vitamin B12 helps your body to make DNA, and is a water-soluble nutrient that has a role in other crucial processes in your body.

How do you know how much Vitamin B12 you should take to maintain a healthy amount of the vitamin in your body? Are vegans more prone to Vitamin B12 deficiency? We answer these questions and help you to understand the B12 dosage for vegans to help you avoid developing a B12 deficiency. We will also answer some of your questions about Vitamin B12 and how to add more of the essential vitamin to your diet.

What is Vitamin B12?

Vitamin B12 is produced by a bacterium in the soil. The same researchers who discovered that certain mushrooms provide Vitamin B12 also indicate that it is likely bacteria-derived because of the location of higher amounts of B12 in the mushrooms.

Vitamin B12 is a vitamin that has an essential role in the formation of red blood cells. The vitamin also plays a crucial role in nerve function and in cell metabolism. It reduces the level of homocysteine, which is an amino acid. Healthline explains that high levels of homocysteine are linked to Alzheimer’s disease, heart disease and stroke. Vitamin B12 is important for energy production.

You normally find Vitamin B12 in animal-based foods, including meat, cheese and dairy. The fact that it is not found in as many plant-based foods likely leads vegans to wonder if there are foods that they can eat that provide Vitamin B12 or if the body makes Vitamin B12 on its own.

Does the Body Make Vitamin B12 on its Own?

Unfortunately, the human body does not make Vitamin B12 on its own. You find it in foods that contain the vitamin and in Vitamin B12 supplements. Vegans are likely surprised to learn that there are several plant-based food options that provide them with enough Vitamin B12.

Consider the following options for food sources that provide Vitamin B12:

The researchers concluded that there were higher amounts of Vitamin B12 in mushrooms in the outer peel, compared to other parts of the mushrooms. There were also high levels of the vitamin detected in flush mushrooms, including in the caps and flats.

How Much B12 Should I Take as a Vegan?

One important question that vegans likely want to know is, “how much B12 should I take as a vegan?” Are you surprised to learn that, in spite of myths and information from some sources, that vegans often get enough B12 from their diet? Vegans who do not believe that they get enough Vitamin B12 from their diet may take Vitamin B12 supplements. Non-vegan foods, such as egg substitutes or meat substitutes or vegan cheeses may provide Vitamin B12. Read the label to find out if the product has Vitamin B12.

It is important to note that the Vitamin B12 recommended daily intake (RDI) is the same for vegans and for non-vegans. The RDI is 2.4 micrograms (mcg) for people over the age of 14.

Some people need to take B12 supplements because of their age, their lifestyle or because of a Vitamin B12 deficiency.

Symptoms of Vitamin B12 deficiency include:

Does the body absorb 100 percent of Vitamin B12 intake?

No, the body absorbs only a small amount of the vitamin, which is one reason why some people take Vitamin B12 supplements, particularly if they do not get enough B12 in their diet.

Are there side effects of taking too much Vitamin B12?

Yes, if you take too much Vitamin B12, you may experience a strain on your kidneys, decreased urine output, blue lips or fingernails, rapid heartbeat or irregular breathing, among other side effects.

Is it true that Vitamin B12 comes from bacteria?

Yes, Vitamin B12 is produced by a bacterium in the soil. The same researchers who discovered that certain mushrooms provide Vitamin B12 also indicate that it is likely bacteria-derived because of the location of higher amounts of B12 in the mushrooms.