How to Get Wider Biceps

If you lift weights in any capacity, you’ve likely had the goal of getting wider biceps and learning what exercises are most effective. In order to “scratch that itch” and help lifters everywhere with their bicep workouts, we’ve put together this guide to dive into the topic in detail.

We’re going to walk through how to make your biceps wider, the best bicep exercises you can do, and jump into several categories of exercises that work best at engaging your bicep muscle.

You’ll learn about bicep stretches, what to do if you happen to injure or stretch a tendon, and then get additional information about common questions lifters often ask. If you’re ready to jump in, let’s get going!

How to Get Wider Biceps 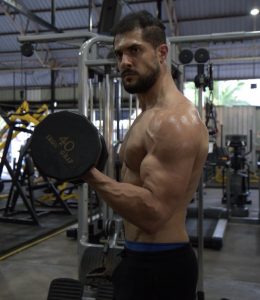 If you’ve been doing consistent bicep curls in order to build bigger arms but still don’t think your arms are wide enough, you aren’t alone. This is a common complaint of most lifters, where the exercises they’re doing are helping their biceps grow, but the muscles aren’t wide enough to get that aesthetic look.

If you can get your biceps wider, you’ll immediately notice how much better they’ll look from the front instead of just from the side. In the next few sections, we’re going to show you how to make your biceps wider with a few simple tips and tricks.

Focus on Pumping Your Biceps

One of the best ways to make your biceps wider is to focus on “pumping” your biceps with each workout. This means using more intensity in your sets in order to get the blood flowing in your bicep muscles and get them the nutrients they need in order to grow.

One of the best ways to make your biceps wider is to focus on “pumping” your biceps with each workout. This means using more intensity in your sets in order to get the blood flowing in your bicep muscles and get them the nutrients they need in order to grow.

While some lifters focus exclusively on bicep workouts, they completely ignore their triceps. If you want to make your biceps wider, don’t forget to work out your triceps on a regular basis.

Your triceps are the largest muscle group within the arm, and ignoring them will cause an “imbalance” in which muscles you’ve developed. By properly working out your triceps and giving them attention in your sets and reps, you’ll notice that your arms will look larger even when you’re not actively flexing your arm.

The best way to build up your triceps is to include bench presses, dumbbell presses, and shoulder presses into your workout routine. Switch between dumbbells and barbells and cable extension movements in order to get your arm muscles to a similar level of development.

In simple terms, building bicep width involves building muscle mass, which means you have to lift heavier weights and work your triceps regularly.

How to Get Biceps Veins

If you’re a fitness enthusiast or bodybuilder, you’ve likely had the goal of building prominent veins. In the fitness world, these prominent veins are referred to as “vascularity.”

When you have low levels of fat under your skin (subcutaneous fat), you’ll also have more defined muscles and veins as a result.

If you want to get veiny arms and biceps, the best way to do so is to increase your muscle mass by performing high-intensity weightlifting exercises. Doing this causes your muscles to enlarge, and as a result, your veins move closer toward the surface of your skin and “pop” more.

You also can’t overlook your overall body fat percentage, since lowering your body fat will make your muscles more prominent, and increase the likelihood of seeing vascularity.

There are hundreds of different exercises that you can perform to work your biceps, but which exercises are the most effective and efficient when it comes to bicep muscle growth?

Building your biceps with a cable machine is a great way to switch up your workouts from dumbbells and barbells.

Some of the best exercises you can do that involve cables include:

In order to improve your upper-arm function and strength, working your long head biceps is absolutely critical. There are several specific exercises you can do for long head biceps, some of which we’ll cover in this section.

Some of the best long head bicep exercises you can perform include:

Getting bigger arms isn’t always about cables and dumbbells, sometimes you can incorporate band exercises into the mix.

Some of the best band exercises you can do for your biceps are:

If you want to build up the “peak” of your bicep in order to give it a more aesthetically pleasing look, these are the exercises you should be doing on a consistent basis.

The best bicep peak exercises include:

Stretching your biceps is absolutely essential in order to prevent injury, and help your tendons get back to normal after an intense curling session. In this section, we’re going to go over some stretching exercises you can do in case you’re recovering after a tendon tear, or trying to relieve bicep tendonitis.

If you’re recovering from a tendon tear and want to stretch your biceps in order to speed up recovery, there are several exercises you can do to help.

Some of the best bicep tendon tear exercises include:

For any lifter recovering from bicep tendonitis, there are a series of exercises that can be done to speed up recovery.

The best bicep tendonitis exercises you can do include:

How Can I Increase My Biceps Size At Home?

How Do You Get Big Biceps Without Weights?

How Many Sets Of Biceps Per Workout?

In order for your biceps to gain muscle mass, you should aim to perform anywhere from 3 to 6 sets of bicep exercises, with 6 to 12 repetitions per exercise. For optimal training results, rest anywhere from 30 seconds to 90 seconds between sets. When choosing weights, make sure to choose just enough weight to challenge your biceps, but not so much that you can’t complete a full set of bicep exercises.