I’m guessing you’re puzzled, just like the rest of us, after seeing Paul Giamatti’s dramatic transformation. It’s been a long time since we’ve seen any changes in his appearance, so the shocking weight loss in Billions’ comeback didn’t go unnoticed. Even his beard was shaved!

Naturally, many rumors began to circulate. Some people were very concerned, saying that he was sick. Other people claimed that he had weight loss surgery.

So, what’s the true story behind Paul Giamatti’s weight loss? Continue reading to find out! 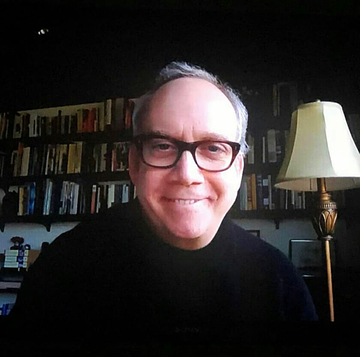 The last time we saw Paul Giamatti before his makeover was just before the pandemic paused his hit series “Billions.” That was in the year 2020, right in the middle of Season 5. The season was then resumed after 15 months.

What’s interesting is that Giamatti took the spotlight away from the show’s return by appearing in a completely different look. Fans were far more interested in the changes his character Rhodes brought with him than in the long-awaited series comeback.

He appeared to be about 15 pounds lighter and had shaved his beard. Naturally, many people were worried about him being sick or struggling with depression. Others assumed he underwent weight-loss surgery.

So, here’s what actually happened:

During the pandemic, Paul focused on improving his health by exercising and watching what he ate. However, when it comes to specifics like his diet plan, workout routine (see also ‘How To Add Powerlifting to Your Workout Routine‘), and so on, he’s a little ambiguous. He hasn’t revealed much about his weight loss journey yet.

The fact that he’s currently filming the comedy-drama “The Holdovers” gives us even more confidence in his overall health. In this movie, Giamatti portrays a despised prep school professor who doesn’t have any family to spend Christmas with.

Thus, he remains on campus to keep an eye on the students who are unable to leave for the holiday. He’s then left with two characters who each have their unique backstory, and they all eventually develop an unexpected bond.

Did Paul Giamatti Lose Weight for a Specific Role?

The short answer is no. Nothing came out or was released indicating that Paul Giamatti’s weight loss was to serve a character he’s playing.

Paul has been entertaining us with his film roles for over 20 years. During that time, he received numerous awards, with an Emmy standing out.

Not to mention that he has received multiple award nominations for various roles. One of which was an Oscar for best supporting actor in “Cinderella Man.”

Given his roles over the years, I’d say Paul’s characters only require him to be despised as the bad guy, which he does admirably!

He once said of his roles, “Generally, when I get offered these roles, they’re twisted or odd. It’s never a straight-up romance. Like, the character can’t speak or they turn out to be a serial killer.” But hey, we’re not complaining!

Nonetheless, during this fruitful career, we’ve never seen a headline saying, “Giamatti losing weight for his upcoming role.” He has yet to come across a role that demanded him to do so.

That’s not necessarily a bad thing; I’m sure we’ve all seen how some Hollywood actors (see also ‘Joaquin Phoenix Has Been Vegan for Over 40 Years‘) drastically slim down to fit a particular role. It sometimes goes too far that you start to worry about their wellbeing. While we’re at it, here are a few of them:

Of course, the brilliant Christian Bale in his role as Trevor in The Machinist is our first example. He lost 63 pounds to play an insomniac who begins to question his mental stability.

Bale lost this weight in four months and you won’t believe how he did it:

To prepare for this role, he would only eat an apple as well as drink water and a cup of coffee per day. Not to mention that he smoked a whole lot of cigarettes (see also ‘Is Juul Vaping Vegan?‘) and drank whiskey to help him lose weight faster.

For his iconic role as Ron in Dallas Buyers Club, McConaughey shed 47 pounds. He was getting into character as a rodeo cowboy suffering from AIDS.

Because a lot of his roles revolved around him being a fit, good-looking guy, that transformation was shocking.

During a show, McConaughey did admit that some of his family and friends were concerned about his health.

Then he explained the four-month diet he was on before filming. He basically ate five ounces of fish with a cup of vegetables twice a day, a pudding in the morning, and red wine at night.

The stunning Anne Hathaway had to be on our list for her role as Fantine in Les Miserables. She wanted to embody her character’s sufferings, which she once said had to look like something close to death.

To reach that, Hathaway lost 25 pounds in total, 15 of which she lost while filming. She only ate two tiny pieces of oatmeal paste per day to lose 10 pounds before the movie.

If that isn’t enough to describe “Les Miserables,” I don’t know what is. Way to go, Anne! Eventually, she did win an Oscar for Best Supporting Actress for this role, making it all worthwhile.

What Do Paul’s “Billions” Co-Stars Think of His Weight Loss?

Even though only one of Paul’s co-stars commented on his transformation, I’m sure they were all as surprised as we were. After all, they’ve been working together on set for several years, since the series premiered in 2016.

In Billions, actor David Costabile plays Mike Wagner, Bobby Axelrod’s right hand. He made a virtual appearance on ExtraTV, where he shared some exciting news and talked about Billions’ return.

Obviously, they asked him about Paul’s weight loss and whether he knew how he did that. “I have no idea,” David joked, “maybe he just fasted the entire pandemic.”

Fans were somewhat relieved to see one of Paul’s co-workers laughing about it; there were no signs of concern, implying that Paul was fine. Then, we were reassured when Paul started doing interviews himself and looked fantastic.

What’s more, when David was asked how he handled the pandemic, he replied with a sarcastic reference to Paul. He said, “I decided to keep the beard and the weight, I added all of Paul’s weight.”

What Was Paul Giamatti’s Take on Shaving His Beard?

Paul Giamatti had kept his beard for quite some time, and he maintained this appearance throughout the entire run of Billions. Suddenly, he showed up, no weight, no beard. Since the series’ resume was somewhat abrupt, the actors weren’t given the chance to make any changes.

What did Paul say about shaving his beard, then?

He briefly talked about the “shaving situation” during an appearance on “The Late Show.” Giamatti explained that they had to pick up where they left off in episode eight, which they had already begun filming.

At that point, both fans and the host, Stephan Colbert, were perplexed. None of the actors had the opportunity to work on their appearances before returning to their characters after a year off.

Paul laughed and pointed out that for him, he made a lot of changes, including shaving his beard. Now that was a Rhodes signature!

When Colbert asked Paul how the crew reacted, he replied,  “That’s funny, it was kind of offhandedly acknowledged like somebody just got a nice shave or a new look, and then it got sort of dispensed.”

Did Giamatti’s Weight Loss Affect His Role in Billions?

First, I’ll give a quick recap of Billions for those who missed it so they can keep up with us. In a nutshell, Billions is a fusion of drama and politics.

The plot revolves around a rivalry between Bobby Axelrod, a hedge fund manager, and US Attorney Chuck Rhoades. Throughout the series, they both try to outwit each other to carry out their plans.

We’ve reached the point in the series where Chuck is mentally and professionally crumbling. He’s been through a lot of hardships and betrayals. Not to mention his father, Charles, pleading with him to keep an open mind about donating his kidney.

For context, Charles is suffering from kidney failure, and Chuck isn’t quite enthusiastic about the idea of saving him. To be fair, Charles isn’t the best father figure out there; in fact, he’s the polar opposite.

With all of these hurdles, Paul’s physical transformation actually fit the current stage of his role. That said, some fans believed he did this makeover for Billions to reflect the difficult time Chuck’s going through.

I recall fans commenting on how Chuck is now turning into his father. He lost weight, grew more white thin hair, shaved his beard, and so on.

Long story short, Paul Giamatti’s weight loss was more of a lifestyle choice, and I applaud him for it. He’s such a talented actor that he enriches any role he plays. I mean, whether he’s playing a bad guy or not, his facial expressions are always spot on!