The Difference Between a Vegan and Pescatarian Diet

Have you ever heard of a vegan who eats fish or asked yourself are clams vegan? These are common questions that come up even from lifelong vegans.

The vegan lifestyle does not include consuming fish or other seafood. Pescatarians are people who eat fish, but abstain from other types of meat. The difference between these two diets is that vegans do not eat fish or seafood.

Here’s your guide to exploring the differences between vegan and pescatarian diets.

One big question for vegans is “are clams vegan?” There are vegans who do eat clams, muscles, and other types of seafood. How can this be if fish isn’t vegan? Read on to find out.

Before we can figure out if you can be a vegan who eats fish, we need to define the vegan diet.

Veganism is a lifestyle that seeks to reduce and eliminate all animal consumption. Some vegans are stricter than others, but in general this means not eating or using animal products. Strict vegans go beyond just a vegan diet and eschew leather and other animal products outside their meals.

What is a Pescatarian Diet?

Before you try to piece together a meal with Red Lobster vegan options, we should cover what a pescatarian diet is.

Vegetarians will find a pescatarian diet fairly familiar. Pescatarians do not eat meat or poultry, but they do eat fish, dairy, and eggs. Pescatarians have a diet that you can consider basically vegetarian + fish.

Many pescatarians are also on diets that are mostly vegan with fish as infrequent additions to their diet. Pescatarians might eat other seafood, like muscles or squid, but this varies from person to person.

Can You Be a Vegan Who Eats Fish?

Vegans do not eat fish or other seafood. A vegan who eats fish would technically be considered a pescatarian. According to the vegan lifestyle, fish is considered an animal product and would be excluded by this diet.

Vegans are going to have to turn to their favorite Korean tofu soup recipe vegetarian instead of fish! 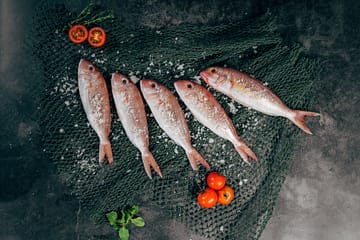 Vegetarians are going to also need to find a good vegetarian shrimp recipe instead of eating fish.

There are certain religious groups that do not consider fish to be a type of meat. Vegetarians who are part of these religious groups might still see themselves as vegetarian, but eat fish on a regular basis.

One big question for vegans is “are clams vegan?” There are vegans who do eat clams, muscles, and other types of seafood. How can this be if fish isn’t vegan?

The Source of the Vegan Clams Debate

This debate originates from Peter Singer’s landmark book “Animal Liberation.” This book outlines some core arguments for the vegan lifestyle.

In one of the most interesting sections, Singer outlines why eating clams or mussels might still be vegan. Here are the pros and cons for “are clams vegan.”

The Pros of Vegans Eating Clams

Singer and other ethicists and researchers have argued that clams, mussels, and other types of sea life aren't technically capable of feeling pain. This comes down to the anatomy of these creatures and how their bodies are physically constructed. These individuals argue that since the animal can't feel pain, eating clams is still vegan.

The Cons of Vegans Eating Clams

However, this research is far from conclusive. There are people who believe that since clams and mussels fall into the animal kingdom, they are still excluded from a vegan diet.

There are other issues to consider that are common motivations for the vegan lifestyle including environmental and sustainability concerns.

Pescatarians who are looking to try out a vegan diet are going to be able to find plenty of options that give them familiar fish recipes and taste, but without any of the actual fish.

Vegans have plenty of options for protein that aren’t fish or seafood. These vegan protein sources include mushrooms, nuts, and beans. You can also enjoy healthy vegan cooking that offers plenty of protein.

Fish contains healthy omega-3 fatty acids that vegans will need to find replacements for. The good news is that there are plenty of vegan sources of omega-3s that you can easily add to your diet!

Vegans spend a lot of time in the kitchen and this could mean getting stuck in a rut with your favorite recipes. You can try to diversify what you eat with low carb high protein vegetarian recipes or even a tasty Korean tofu soup recipe vegetarian! All you need are some good recipes that use vegan meat to get some healthy protein without losing out on flavor.

If you find the right vegan cookbook, you can even make a vegetarian shrimp recipe that will have the pescatarians in your life craving more!

Vegans do not eat fish or other seafood products. The vegan lifestyle is based entirely on a plant-based diet. This means no fish, dairy, eggs, meat, or poultry.

What is Vegan Fish Made Out Of?

You can make a vegan fish out of a variety of plant-based proteins. Vegan fish is commonly made out of tofu, proteins derived from peas, or soy. There are a variety of vegan fish recipes that you can try out at home.

Most vegans would avoid going fishing as it would be pretty easy to argue that fishing harms the animals that you are trying to catch. However, some vegans argue that catch-and-release fishing can be done as quickly and in a way that is still in line with their vegan lifestyle.