The Best Running Programs to Help You Get Started

Running gets your cardiovascular system working. It can also improve lung function and help regulate your weight. Before you add running to your to-do list, it helps to know some information to tailor the best workout for you. In this piece, you'll find the following pieces of information about running:

Running in Place Vs Running

When you can't get outside to run, you may wonder if running in place inside is giving you the same workout.

Running in place is an excellent aerobic workout, especially if you can't get outside to run. It's still working your cardiovascular system and muscles. However, running in place or on a treadmill works fewer muscles and isn't as complete of a workout.

When you run, you work both primary and secondary muscles. The primary muscles you use when running include your front thigh muscles, hamstring muscles, gluteus maximus, iliopsoas (hip muscles), and your gastrocnemius and soleus (calf muscles). In addition, you engage your upper abdominal and lower abdominals. These muscles are known as your core muscles and are necessary for stabilizing your body as you run.

Running inside, whether on carpeting or smooth flooring, strains the muscles less. In addition, you need your abdominal muscles to stabilize you as you're running forward but don't need them as you're remaining in place.

You'll burn more calories running outside than you would on a treadmill or in place in general. The amount of calories you burn from any aerobic exercise depends on how much effort you're putting into your workout. And part of that deals with how much you weigh. So, let's say you weigh 120 pounds and you're running outside. You'll burn an average of 11.4 calories per minute. Therefore, if you run for an hour, you'll burn 684 calories. If you weigh 180 pounds, you'll burn an average of 17 pounds per minute, which is the same as 1,020 calories.

Although there are various running programs that are beneficial, some stand out more than others. For example, you could participate in a 40-minute run. You divide that time into five-minute intervals run at a tempo pace. Then, you have a three-minute recovery time in between.

If you're a more experienced runner, you could complete a 60-minute run. You run at intervals of eight minutes with four-minute recovery times in between. 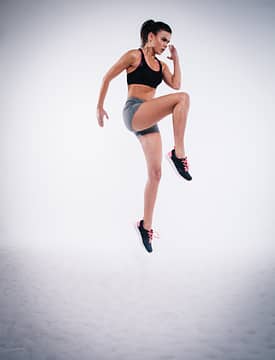 The best running schedule for you depends on your particular goals. For instance, do you just want to get healthier, or are you training for a marathon? Are you looking to lose weight or merely maintain your current weight? As a general rule, though, the best running schedule for anyone is to run three or four days out of the week. This is ideal because it's enough that you're working your muscles and receiving the cardiovascular benefits of running. When you run more than this, you put yourself at a greater risk of sustaining an injury.

Generally, you should alternate your on and off days. For example, you should run one day and then be off the next. This gives your body time to recover.

Below is a list of frequently asked questions about running and running programs to help you get started:

How far do I need to run to lose weight?

There's no direct answer to this because everyone burns different amounts of calories based on their weight. The speed of your run, the difficulty of the terrain, and the running program you're using also play a role. But as a general rule, the only way to lose weight is to burn more calories than you take in.

Is running the best way to lose weight?

Running does rank as one of the best workouts, though when you compare running in place vs running outside, running outside burns more calories and is a better overall workout.

When you run, you burn a high amount of calories in a short amount of time while building muscle. Second, it's an easily accessible exercise that doesn't require any special equipment.

What are the benefits of running?

Running can help you lose weight or remain at your current weight. It's useful for preventing muscle and bone loss, two issues that can happen as a person ages. Plus, you're working a variety of muscles at once when you run.

When you run or get aerobic exercise in general, you're working your cardiovascular system and reducing your risk of a heart attack or stroke.

What does 30 minutes of running do?

A 30-minute run will help you burn a minimum of 350 calories if you're 120 pounds. You'll burn even more if you weigh more than that.

During those 30 minutes, you're also giving the muscles in your legs and core a workout. And according to the Mayo Clinic, you should be getting at least 30 minutes of exercise each day or 150 minutes each week, broken up into a schedule that works for you.