Are Starburst Good Candy For Vegans

Starburst is a multi-colored candy. It is shaped like a cube and is extremely chewy. Anyone who grew up in the USA or UK knows what I am talking about. Just the smell of Starburst candy is enough to take you down memory lane. On seeing a pack of Starburst, you will find yourself reminiscing in childhood nostalgia. Starburst candy is one of the most well-liked candies in the world. You cannot imagine a time without Starburst.

The color, shape, and smell take you back to the good old days. Each flavor has a different memory attached to it. It doesn’t matter how old you are; the thought of Starburst candy makes you feel like a child again.

Generations after generations have grown up eating Starburst candy. And these generations have evolved, so have their eating habits. People have now become more conscious about what they put in their bodies. Eating habits have changed drastically over the years. Most people prefer healthy alternatives to sugar, while others prefer cruelty-free products. Veganism has become widely popular in the world. People are now more aware than ever.

They want to make sure the food they eat does not harm any animals. It also includes the ingredients. Earlier it was hard to determine where the ingredient came from. But now, with a simple click of a button, you know exactly where your food comes from. You can also find out what it is made out of. 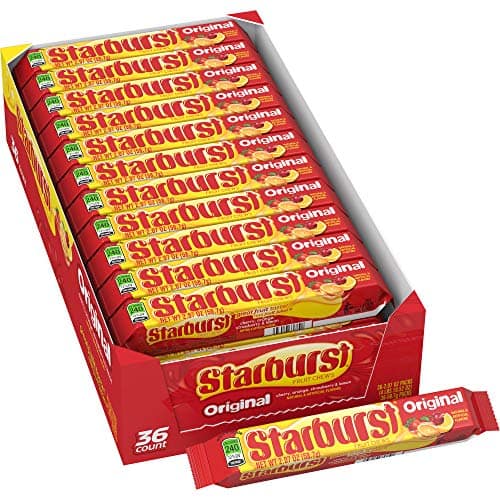 Starburst candy is fruit-flavored. It comes in many different flavors. Lemon, orange, lime, and strawberry were the original four flavors. Later, Starburst was introduced in black current and apple flavor. Starburst is manufactured by a company named Mars Incorporated. This company later introduced a variety of flavors. Some stayed for a long time, while others were taken off the market after a while. Starburst was launched initially in the UK.

Even though the name changed, the taste of Starburst candy remained the same. The consistency and size of the candy have remained the same for years. It is approximately a 15m x 15m cube of delicious flavors. Starburst is still available in candy stores. Starburst candy is one of the most popular products of Mars Incorporated. Starburst consists of several ingredients often used in candy. Since it is an all-time favorite, most people don’t mind the ingredients used.

But this isn’t the case with vegans. If you are vegan, chances are you only consume plant-based products. It means if Starburst candy contains any animal product, it is not vegan. Veganism promotes the ethical treatment of animals. Products that cause distress or harm to animals are not considered vegan-friendly. Dairy is the best example of a non-vegan product. Even though animals are not killed while extracting milk, they are put under a lot of distress.

Cows are artificially impregnated so that they produce milk. This milk is then used for dairy products. Candies containing milk products are not considered vegan-friendly.

Let’s take a look at all the ingredients that go into making Starburst candy.

What is Starburst made of?

Starburst is a fruity candy. As you take a bite of the candy, the flavors melt in your mouth. It feels like heaven. Anyone who has eaten a starburst knows the feeling. Starburst candy is made out of several ingredients. You can turn the packet and read the list of ingredients on it.

You have sugar, corn syrup, fruit juice from the concentrate of the particular flavor, dextrin, citric acid, hydrogenated palm kernel oil, and gelatin. Gelatin and Palm oil are two animal-derived ingredients. Gelatin is made out of peptides and proteins.

These ingredients are derived from connective tissues, bones, and skins of animals such as chicken, pigs, fish, and beef. Since gelatin is made out of animal products, it cannot be considered vegan.

Starburst uses gelatin in its production, which is why it cannot be considered vegan. It is not even regarded as vegetarian. Starburst candy has been manufactured for years. Since it is so popular, the company has continued its production. The ingredients used in Starburst candy are considered vegan friendly by some people. At the same time, others argue that it isn’t vegan-friendly.

Is it Vegan Friendly?

Starburst produced in the UK does not include gelatin. But Starburst manufactured in the USA does. Although some people think Starburst made in the UK is vegan, others beg to differ. You see, even though it does not use gelatin, Starburst does include palm oil. There is a massive controversy amongst vegans about the use of palm oil. Palm oil is not derived from animals and is technically vegan. But some activists claim it isn’t.

To make palm oil, several rainforests had to be eradicated. These rainforests were home to many wildlife animals. Since the rainforests were cut down, all the animals lost their homes. The whole idea of going vegan is to use cruelty-free products. And there is nothing crueler than snatching away the homes of wild animals. That is why some vegans do not consider palm oil as a vegan-friendly product.

Another ingredient used in Starburst candy is lecithin. It is a common ingredient used in most candy. It is used as a lubricant. Lecithin is derived from both animal and plant sources. We are not sure which type of lecithin is used by Mars incorporated. Since they are a vegan-friendly company, it should be plant-based.
In conclusion, Starburst is vegan friendly in the UK but not in the USA.

Since the Starburst candy made in the UK does not include gelatin, it is considered vegan. At the same time, the one manufactured in the USA is not vegan. If you want to check if the candy is vegan friendly or not, look at the list of ingredients. If it includes gelatin, then it is not vegan-friendly.

Corn syrup is another ingredient used in Starburst candy. It is made up of starch. The process of hydrolysis is vegan-friendly. And since corn syrup is a plant-based product, it too is considered vegan.
The flavors are made from concentrated fruit juices. It makes the ingredient cruelty-free and vegan friendly. Even though the colors are not made out of animal products, they are tested on animals. There is a very thin line between vegan and non-vegan ingredients.

Malic acid is another ingredient added to the Starburst candy. All living organisms produce this ingredient. It can be derived from plants or made in a lab. It makes malic acid vegan friendly.
Beta-carotene is used for food coloring. It is a pigment that plants naturally produce. Beta carotene is derived from fungus. Thus, making it a vegan-friendly ingredient.

Once you understand the ingredients of a product, you can quickly figure out if they are vegan-friendly or not. Any ingredients that cause harm to wildlife are not vegan friendly.

Is it healthy to eat Starburst?

It isn’t particularly bad for health. But calling it healthy is a bit of a stretch. Your body uses carbohydrates for energy. Whatever carb is not consumed is turned into sugar. It means your body does not require any artificial sugar.

Starburst candy is great for flavor. The chewy texture makes it fun to eat. But one cannot call it healthy. Flavors added to Starburst are extracted from fruit juices. But many candies have flavors that are artificially made. Artificial colors are made out of insect secretions or crushed bodies of insects.

That is how one gets the confectioner’s glaze on the candy. If you see the glaze on a product, it isn’t vegan friendly. These colors are also linked to ADHD.

Now that you’ve gone through all the ingredients of Starburst candy, you might understand that it is not vegan-friendly. Gelatin is the primary reason for this. Since gelatin is made out of animal skin and tissues, it cannot be considered vegan-friendly.

The protein used in gelatin is derived from fish, beef, chicken, and pig. Gelatin is used in the USA and not in the UK. Starburst produced in the UK is vegan-friendly, whereas the one manufactured in the USA is not. So if you are a vegan traveling to the UK, make sure to binge on your favorite Starburst candy.