How to Make Your Biceps Look Bigger Naturally

Let's get real for a second. You lift for health, you lift to exercise and you might even lift to recover from injury, but in any capacity, lifting makes you look more fit and provides an athletic definition for your body. No muscle group is as popular as the bicep, providing that iconic and masculine Hollywood style look that most are looking to fulfill. Perhaps you've gone to the gym and done every single exercise, but still can't seem to make any more progress in looking better, even if you already feel a lot better and have switched to a more fulfilling diet.

Then we have good news. In this article, we will explore how to make your biceps look wider, increase vascularity, and list the best exercise to work out this little-known muscle in your body that is in charge of making your arms look swole from any angle.

How To Make Biceps Wider

Wider biceps may seem like an elusive goal, but it is usually much easier to achieve than most people think. Wide biceps are the result of working both in shorts and long areas of your bicep. Most of the exercises at the gym may focus on machines and high reps, which engage the "short head" muscle of your arms, making them functionally bigger for short bursts, but not as strong for sustained exercise. Here are the top 3 ways to get wider biceps:

Focus on free weights and compound arm movements:  if you are going to the gym and using every single isolation machine on the floor, your biceps may get stronger over time, but will not contribute to overall arm strength and a powerful bulge to your desired appearance. Isolation exercises that use free weights, such as dumbbells and barbell curls, coupled with military presses and deadlifts will switch your grip and utilize all the muscles in your arms, giving a peak impression of even the smallest auxiliary muscle. The arms are also connected to the shoulders and chest, so these compound movements will also improve your posture, furthering muscle definition.

Focus on pumping long reps: It is worth mentioning the obvious sometimes, as we may all forget the first few lessons we learned when starting on our strength training journey. If you want to build mass quick - eat big, and lift big. If you want to focus on slimming down - eat small and lift small. A primary reason (other than genetics) that you may not yet have achieved a large and broad biceps is that you aren't lifting big enough. Muscle mass isn't built with 3 sets of 15, it is built with 2-3 sets of 4-5 reps, just like a compound lift routine. This doesn't mean grabbing the same weight and doing fewer reps, it means finding a weight that you can barely lift after a few reps, and working your way up. When lifting, remember to lift from shoulder to neck, as longer reps will work the long head of your bicep.

The triceps are bigger: Sometimes "bigger biceps" is synonymous with "bigger arms". If your goal isn't specifically your biceps, but having your arms look like Schwarzenegger in his golden days, the secret is training your triceps. The triceps are a much larger muscle group and increase your strength, vascularity, and muscle mass from most angles (other than when flexing in a curling motion). The triceps are also easier to train, as they are part of many exercises.

How To Get Biceps Veins

Bodybuilders don't focus on vascularity until it's show time. During training, focus on showing your veins work the opposite of increasing your overall size. To increase vascularity, you will need to put on increased mass in your arms by eating more and lifting harder and stronger, as mentioned above. the "veiny" look comes from cutting after a large bulk while keeping a high protein intake. Having veins showing in your arms isn't always a good thing, as this may sometimes be a sign of increased blood pressure or imminent clotting. 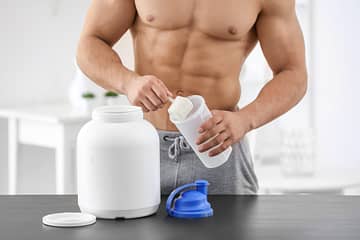 Best Bicep Stretches And Exercise - The Muscle No One Knows About

The brachialis was the reason the white/black tight-fitting t-shirt was invented, so guys could curl their arms outside of their car window, James Dean style, while smoking a cigarette. This brachialis is the small muscle found on the top of your bicep that gives your arms that "mountain" look when flexing. You may not have heard of this as it is not a paramount muscle - however, it's the secret to looking huge.

Cross body hammer curls: start by standing straight with two dumbbells at your side. One at a time, curl each dumbbell across the body and to your other shoulder. Return to resting position and repeat on each side. 3 sets of 5 reps. This exercise is also the best stretch for your brachialis and arms. Just use a lower weight, resistance band, or bodyweight as necessary.

Can I bicep curl every day?

Yes. The biceps is a fast-twitch muscle and can be worked every day, theoretically. However, if your goal is a quick increase in muscle mass, your arms should be worked at 100% of the weight you can lift, leaving them extremely sore and in need of a good rest and proper nutrition. In this case, aim for every other day at a minimum.

When do biceps tear?

Bicep tears are extremely uncommon and are further rarer in the elbow area (which is associated with the curling motion). Tears usually occur near the shoulder-bicep conjunction, which is a result of an injury or improper posture when performing a powerful compound lift.

Should the biceps be stronger than the triceps?

These two muscles are thought of as two sides of the same coin, so neither should be stronger than the other. As the triceps is a larger muscle group, it is usually trained less as muscle mass is easier to put on than its biceps counterpart.