Vegan dishes are delicious, nutritious and full of variety, yet for some devoted meat eaters, the thought of trading their roast chicken and rib eye steaks for plant-based alternatives is just too much to handle. For one of our customers in particular, trying to get their boyfriend to sample a plant-based diet is proving impossible.

The customer in question reached out to us asking if we knew of any hypnotists that would be able to help her boyfriend get over his ‘fear’ of trying vegan meals. She is willing to pay up to $1,000 for this service if they can guarantee he’ll be ‘cured’ by Thanksgiving.

In the request, the woman mentions that she has previously tried to trick her boyfriend into eating a vegan bolognese but failed when he became suspicious and refused to eat it as he feared that the food would ‘make him ill’. She’s now panicking as they are due to spend Thanksgiving together with her ‘carnivore-hating’ family who ‘refuse to be around meat’ and she is worried about the arguments this will cause.

One of the main reasons this customer stated that her boyfriend is hesitant to consider a vegan diet is that he believes it will have a negative impact on his physique and gym routine due to a reduction in protein. This is despite the fact that studies have continually proven that a balanced vegetarian or vegan diet can provide sufficient levels of protein and amino acids [1].

In fact it is perfectly possible to create a vegan bodybuilding meal plan, and go all the way to becoming one of the world’s strongest men, as Patrik Baboumian did. Check out our meal plan guide here.

She also mentions his issues with the texture of certain vegan-friendly foods like tofu and eggplant because he’s worried he may vomit. The refusal to try new foods, even into adulthood, can be caused by food neophobia, which is an overwhelming fear of new or unfamiliar foods [2]. ‘Neophobia’ refers specifically to fear of new. While some ‘fussy’ eating is part of normal development up until the ages of seven or eight, it may be a sign of problems after that.

The woman said that she genuinely loves her boyfriend, but this reluctance to experiment with vegan food is causing a rift between the two of them. While

she isn’t as militant as the rest of her family about meat-eating, she is upset that he won’t embrace what is an important part of her life. After discussing it together, the boyfriend has agreed to try out hypnotherapy if it will help save their relationship and help him get over his food neophobia. 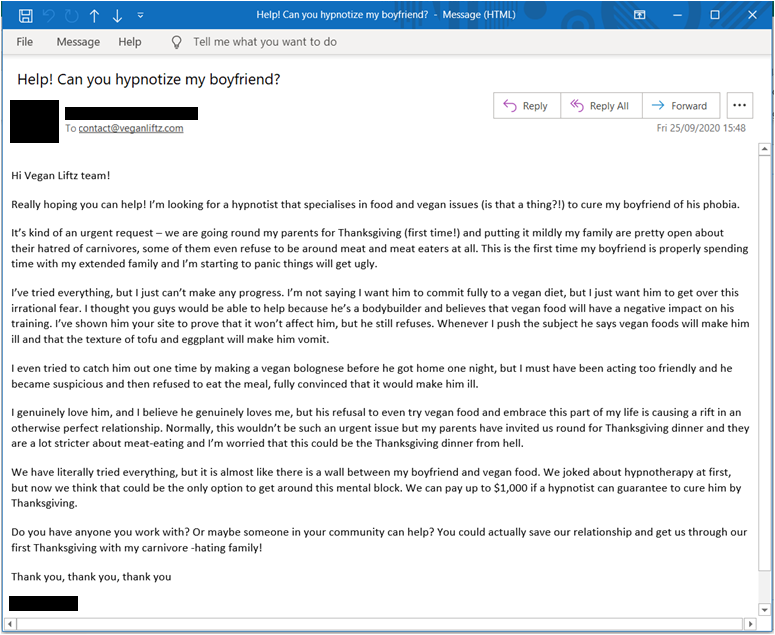 If you are a qualified hypnotist who would like to help our customer’s boyfriend get over their mental block of trying vegan food, please register your interest in the below form:

“It is one of our most common enquiries and part of the reason behind launching VeganLiftz in the first place; and that is simply that there is still a misconception that a plant-based diet can’t provide sufficient protein for bodybuilding and high intensity workouts. You only have to look at Patrick Baboumian, one of the world’s strongest men to see that it is entirely possible to achieve and even excel your fitness aspirations on a vegan diet.

“That may be a common enquiry, however this is the first time we have ever had anyone consider hypnotherapy! If there are any hypnotists out there that believe they can help in this situation, we would love for you to get in touch and save this relationship!”