People go vegan mainly for environmental concerns, animal welfare, and health benefits. And from these common reasons, they uncover more benefits from eating plant-based products that make them want to stick with this diet.

But if you're wondering what veganism is and what exactly are the advantages of going vegan, you've come to the right place. In this article, we'll discuss the rationality behind a controversial topic that's worth your attention and time. Let's get to it!

It's a diet where any food derived from or produced by animals is removed, such as meat, fish, honey, eggs, and dairy products. To simply put it, veganism is a diet entirely based on plant-based food options.

Despite what many believe, vegan diets are also a lifestyle choice. It's about improving consumption habits to minimize the suffering of animals and advocating for a more caring world.

Other than what they eat, many vegans also consider the materials used in making the clothes they wear, like leather from cows, wool from sheep, other's skins. This ensures that no form of animal use is being justified as we shouldn't be wearing or using them.

They also don't support cosmetics, furniture, labor, and other products that can negatively impact living creatures and the environment.

Why do people go vegan? Here are the top 5 reasons:

It's easy to see that becoming vegan is a way to close the door to many inhumane things that happen to animals, the planet, and ourselves, but we barely scratched the surface. So, let's dive deeper into the benefits of going vegan.

To Fight Against Animal Cruelty 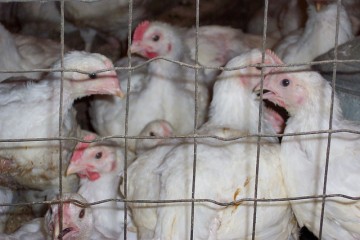 This ethical or moral argument is one of the key factors for deciding to choose a vegan lifestyle because:

Humans are so used to consuming meat that they rarely think about the source of their food choices – slaughtered animals. It may be difficult to notice the extreme cruelty in the dairy and meat industries, but it's not only with the animal exploitation in slaughterhouses. It also stems from the way the animals are bred and raised.

Vegans abstain from animal products because they find factory farming and slaughtering of animals wicked. They're concerned that an animal raised for food, like dairy cows and egg-laying chickens, is leading an unnecessarily short, dismal life. Did you know that cows can live up to 25 years? But in a factory farm, it's different. Most dairy cows in dairy farms die after five years.

In the egg industry, chickens, free-range or not, are raised in small cages in factory farms with no room to walk or even stretch.

Many of us do our part for the planet to some degree by recycling, but going vegan reduces our footprint on a larger scale and has a more positive environmental impact.

Animal agriculture needs plenty of land and water to grow grain feed and support livestock. The land conversion for feed crops and pastures leads to soil degradation and deforestation, resulting in a decline in biodiversity, causing climate change.

Vast crops of grain or corn also require fertilizers and pesticides. But the nitrogen in fertilizers contributes to algal blooms, which creates dead zones. Other than nitrogen pollution, other issues related to animal agriculture include greenhouse gas emissions.

And let's not forget that livestock generates waste and pollution, too. Animal manure releases antibiotics that may increase the receptiveness of some bacteria, which can lead to food poisoning. Animal waste also contaminates water if disposed of improperly and can affect aquatic animals.

Unlike purchasing animal products, veganism can end world hunger. There would be plenty to eat for billions of humans if the 40% of crops produced today to feed animals were used for plant-based foods for human consumption.

With the help of a professional, a well-planned vegan diet argues with the myth brought up by meat-eaters that veganism is unhealthy. Although veganism requires supplements, you can still get all the necessary nutrients without eating meat or using any animal products.

Plant foods like veggies, fruits, and whole grains are not just low in fat and cholesterol, but they're also rich in many vitamins, minerals, and fiber.

The American Dietetic Association reports that vegans and vegetarians enjoy the health benefits of plant-based diets as they have lower cholesterol, blood pressure, and lower body mass indexes. They also have a reduced risk of getting sick from hypertension, diabetes, cancer, and heart disease deaths. And that's not the only difference when you don't eat meat.

So, it's unethical and illogical to breed animals, make them suffer, and kill them for meat production, and it's also bad for our health.

To Join the Vegan Revolution and Challenge the Status Quo

Young people going vegan are on the rise because they want to take control of something they can in a world of many things they don't have the power to change. As it comes from personal autonomy, they start building from the inside out – their body, family, community, and hopefully, the country.

Social media also plays a large part in the vegan movement, unlike when there was no internet and a plant-based diet was frowned upon.

Nowadays, fellow vegans can connect and share anything about their diet. They can communicate, promote, and even protest. It is easier to find vegan products and share delicious recipes that are simple yet imaginative. Vegans can finally show everyone that eating vegan is effortless and comforting.

Others are influenced by celebrities who are successful, good-looking, and healthy without any meat consumption.

Some of the high-profile vegan personalities that make eating veggies, fruits, and soya look sexy are:

If you think it's expensive to buy vegan products or time-consuming to prepare them, you don't need to force yourself. There are plenty of vegan restaurants, cafes, stalls, and even food trucks popping up all over the country!

Established suppliers and vendors now recognize how practical and sustainable vegan food is. Though they're not entirely vegan, some restaurants still offer vegan choices on their menu.

And in supermarkets, there are plenty of plant-based products that are readily available, like coconut, oats, rice, soy, and almonds, to name a few.

How Can I Make a Change By Going On a Vegan Diet?

There are countless reasons to go vegan, and whatever it is, what's important is for you to do your research and have all the information you need to have a healthy life while being on this diet. Learn everything you can about veganism and why people do it and consult a professional so you can have a guide specifically made for you.

Switching to fruits and vegetables will help you become healthy, save plenty of factory-farmed animals, and care for the world for future generations.

Have you decided to start your vegan diet? Are you doing it for animal welfare or to help lessen air pollution? Do you want to stop the animal suffering from factory farms, or do you want to join a loved one on their plant-based eating journey? Share your story with us by leaving a comment below.