Vegan Strip Club: The World’s First and Only

No, this is not a joke. No, this isn’t an article from The Onion. No, it isn’t April Fools Day. The world’s first vegan strip club in Portland, Oregon, has been opened by a guy named Johnny Diablo Zukle.

This is a strange mish-mash of cultures coming together, and to tell you the truth, I’m not sure what to make of it.

On the one hand, vegan culture is starting to permeate every facet of American society… on the other hand, it’s starting to be associated with nude bars, which tend to be a bit seedy.

However, for better or worse, Casa Diablo is currently the world’s only vegan strip club, a place where Portland strippers meet a menu of all vegan food.

What a world we live in.

What is a vegan strip club?

A vegan strip club is essentially a normal gentleman’s club which has a house policy of no animal products being used in the kitchen and no (real) feathers or animal-derived materials being used on stage.

If you eat food from the club’s menu or watch the entertainment, you will not come across any animal products (1).

As Johnny Diablo, the owner, explains:

Our policy here regarding dancers and what they wear, it’s the same as basically our food – it’s all vegan.

Diablo goes on to talk about how the idea for the business came from a place of love and positivity:

“We just don’t have [non-vegan products] here. We’re all about love and compassion; that’s what we do at Casa Diablo.”

He does make it sound very cute and wholesome, but let’s not forget that it’s a place where women take their clothes off for money, eh?

Who is Johnny Diablo? 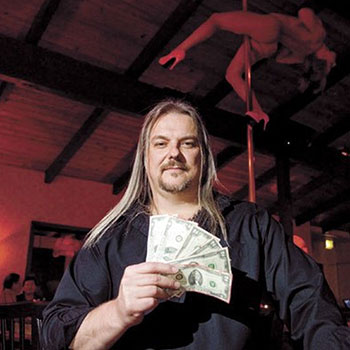 Johnny Diablo is certainly an interesting figure. Diablo is a vegan himself, and claims to have avoided meat and dairy throughout his entire life.

In interviews about Casa Diablo, he talks about avoiding “cruelty to all creatures” a lot, so it does sound like he’s the real vegan deal with some pretty good ethics, even if you have mixed opinions on the ethics of running a nude joint.

Casa Diablo actually has an interesting origin story, starting out as a vegan restaurant called Pirate’s Tavern but struggling due to the economic recession a decade or so ago.

At that time, veganism was not as popular as it is today, so Diablo decided to build a stage and bring some dancers in, finding that the clientele was more open to trying meat-free food if it meant they could watch strippers… makes sense (2).

Following the success of his first vegan strip club, Johnny is now looking to open a second location in another part of Portland.

Portland: the strip club capital of the world

Have you ever wondered why there are so many strip clubs in Portland?

Well, in addition to the town’s general reputation for being “weird” and “out there”, it has a lot to do with old archaic laws which have been upheld for more than 150 years.

You see, according to Article 1, Section 8 of the 1859 Oregon constitution, freedom of expression is very highly valued (3).

The exact quote is:

“No law shall be passed restraining the free expression of opinion, or restricting the right to speak, write or print freely on any subject whatever.”

You wouldn’t think that “free expression of opinion” translates directly to “titty bars galore”, but Oregon’s Supreme Court sees it that way, and has been making it easy for strip clubs to pop up all over Oregon’s biggest city, whether they’re vegan or not.

The city actually has the highest amount of strip clubs per capita in the United States, beating out places like New York and Las Vegas to take the top spot.

Portland: the vegan capital of the USA 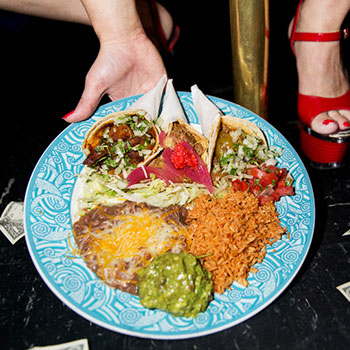 Of course, the fact that Portland is one of the most vegan-friendly cities in the world is also a major contributing factor to the strip club’s success.

In fact, according to HappyCow, Portland is the 4th most vegan-friendly in the world, coming in behind London, Berlin, and New York (4).

That makes Portland the second best town for vegans in the USA, which is impressive when you consider its size compared to a sprawling metropolis like NYC.

Whether you’re looking for health wellness stores, fancy hipster coffee shops, or nude bars which ban meat, this unique and unusual town has got you covered.

The fact that Portland is a mecca for both strip joints and vegans makes it seem kind of inevitable that the world’s first vegan strip joints would pop up here of all places.

You can watch this vlog from Youtuber Lauren Toyota which shows her vegan food journey in Portland.

Portland is famous across the world for its supposed “weirdness”, with the “Keep Portland Weird” slogan famously adorning buildings, shops, and bumper stickers all around the city (5).

Shows such as Portlandia famously mocked the strange nature of the city, featuring sketches based on erratic and unusual local residents from all walks of life.

So it begs the question – would Casa Diablo ever work in another city?

Diablo himself has said that the Casa Diablo vegan strip club brand is available for licensing, but I’m not sure that this concept would ever work in other cities.

From my own experience and traveling, the only place I’ve been that’s quite as weird and “out there” as Portland is Berlin, where they thrive on being unusual, but I don’t know if Diablo is prepared to license internationally.

Are the dancers all vegan?

So, are the dancers all vegan at Casa Diablo?

The answer is maybe, maybe not. As far as we can tell, the house enforces a strict “no fur or leather on stage” rule, but the performers are free to eat whatever diet they want.

Chances are that you may encounter some genuinely vegan strippers at the club, although many of the performers are likely to have their own dietary preferences too.

Still, as long as they’re not barbecuing ribs on stage, I don’t think it should really matter what the performers eat in their private lives.

Can strip clubs ever really be vegan? 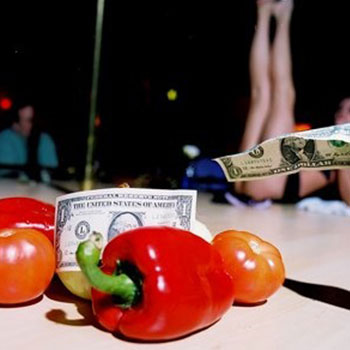 It’s hard to say if strip clubs can ever really be vegan like Casa Diablo claims to be.

For example, one of the club’s mottos is: “meat on the pole, not on the plate”, which brings up a whole host of problems and inconsistencies in the clubs ethics.

Of course, I understand that it’s just a clever pun, but it is rather disrespectful and objectifying to the female performers.

Furthermore, you could argue that a vegan nude bar degrades its performers even more than regular clubs, as it implies that the performers are treated with less respect than cows and pigs.

Nonetheless, I’m willing to bet that vegan customers, on the whole, are going to be more ethical and conscious people, so it could indeed be the case that rowdy and disrespectful customers are less of a problem at a meat-free strip joint.

Who knows, eh? I just wanna take a look at the menu.