Vegan Fitness Models That Are Dominating the Industry

For a long time, the belief that the plant based diet would leave you weak and scrawny has persisted.

But now, thanks to a new wave of vegan bodybuilders and fitness freaks enjoying the vegan lifestyle, new life has been breathed into the diet from a health and fitness standing.

Today we’re going to look at some of the inspirational women who are leading the charge on social media championing vegan fitness and the vegan diet by living the vegan lifestyle.

Best known as Naturally Stefanie on her Youtube and Instagram accounts, Stefanie Moir has amassed a huge amount of followers.

As passionate about her vegan lifestyle and diet as she is bodybuilding, her gym selfies prove that the plant based diet is definitely not lacking in protein.

Having been named the UK and Irelands hottest vegan, she has been capitalizing on her ever-growing platform to share advice about the foods she eats on a vegan diet and her fitness routine to build muscle with all who are interested. 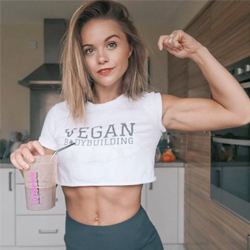 Jehina didn’t become vegan, she has been vegan since birth. But she wasn’t born an IFBB Professional Bodybuilder (see also ‘Top 10 Beautiful Female Bodybuilders 2022′), she had to earn that.

There has always been some controversy when it comes to professional vegan athletes (see also our guide to being a vegan cyclist), with people claiming they haven’t always been vegan and their base was built on animal products.

Jehina completely dismantles that argument and proves that as a vegan athlete, plant based power is very real. Running her own website that aims to promote a healthy and balanced lifestyle, Amanda Fischer is a plant based personal trainer and mom who more than walks the walk.

After having lost over 30 kilos when she switched to a plant based diet herself, she now hopes to spread the motivation and reason behind her vegan fitness lifestyle with the world.

She is a personal trainer that you can access through your phone and her inspiring vegan fitness regime can help you do exactly what she did. Not content to just smash the stereotype of the vegan bodybuilder, Rocky Leudeker defies age stereotypes, too. And at over 60 years old, you have to admit she looks great doing it.

Belonging to an older generation, it’s not that surprising that Rocky has less of a presence on social media, but her inspiring story and photos are still worth checking out [1].

This absolute glamour grandma looks better than most women and can outlift most men, and she will tell you it’s all down to her vegan bodybuilding and healthy vegan life. 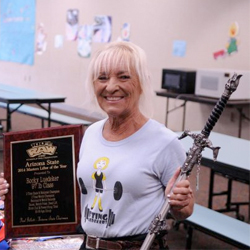 Another entry on the list that isn’t just content to destroy the world’s view on the vegan fitness model but on the brains and brawn debate, too.

Angie Sadeghi, M.D. is a gastroenterologist based out of Newport Beach, California.

After she managed to cure her own ongoing chronic health issues by switching to a plant-based diet, she wanted to help coach the rest of the world on the vegan health benefits (see also ‘The Health Benefits of Eating Vegan’), too. 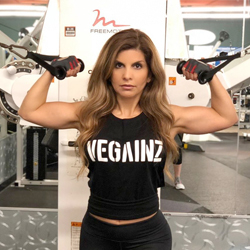 Yolanda Presswood is a vegan athlete who holds countless medals and trophies for her powerlifting career and even the American records for both squat and bench, which also saw her crowned as the Best Masters Lifter (see also ‘Eccentric Leg Exercise Workouts For Advanced Lifters‘).

Her Instagram is full of truly phenomenal achievements and inspiration and is the best slapback for people who thinks vegans don’t get enough protein from plant food. 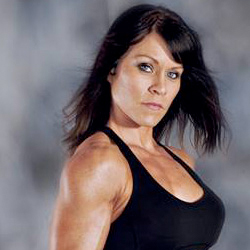 Lesley Cain is a high heeled businesswoman who has become a major proponent for plant-based holistic health.

Her Instagram account follows her vegan diet and lifestyle with plenty of tips, advice, recipes, and inspiration for those looking to follow in her footsteps. She does it all and if her story doesn’t capture your heart, then her captivating smile will.

She’s a mom, a wife, and an abuse survivor who wants to share her plant-based wisdom with the world. After being shown a video about the fur industry, Brin went vegan overnight and hasn’t looked back yet.

She’s a prominent and outspoken voice on her various social media platforms and no one can deny both the inner beauty that shines from her compassion and the outer beauty in that bikini body that glows in her content.

She’s one of the youngest on this list and she uses her platform intelligently to create wholesome wholefood meal based viral content that reaches a wide audience to make an impact.

She’s gained a significant number of followers through her inspiring posts. Preferring the title Dirt Diva to fitness model Catra Corbett is an eccentric but accomplished runner.

Her amazing Instagram account documents her runs and the stunning visuals of her bright gear, hair, and tattoos, juxtaposed upon the neutral colors of the background are all viral-worthy content.

Catra has spoken about how she was reborn on the road and that her diet and rededication to fitness has saved her.

She has competed in over 250 ultramarathons and is the only American woman to have run over 100 miles on over 100 different occasions. Whilst we all know that the storylines and the action in the ring might be fake, the athletism and fitness displayed by professional wrestlers certainly are not.

Laura Dennis goes by Allie when Trail running from turnbuckle to turnbuckle and has held titles in several different promotions including the TNA Knockouts Championship belt.

She has recently been signed to new wrestling promotion All Elite Wrestling (AEW) and we’re expecting big things from her new persona Bunny, alongside her cohorts the Butcher and the Blade. 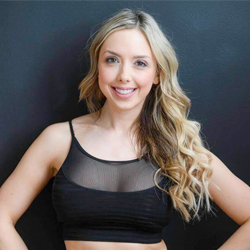 It’s refreshing to see how far veganism has gone over the years, and these vegan fitness inspirations are using their platform to celebrate that. Gone are the days when you have to stack up red meat to earn that fitness model body.

People can look good in a bikini, become a professional athlete or have a fitness model body even without an animal protein meal. Eating vegetarian or fully plant-based food, if planned and done well, can also build muscle and give you that bikini worthy body just as well as a meat based one.

But if you somehow want to get an idea about the vegan lifestyle, then make sure to follow some of these ladies above. They will surely guide you on the right path.

Just don’t think about it as an overnight thing. Going vegan won’t make you magically a model as it may take weeks and months and years for your body to adapt to the lifestyle (See 28 day Vegan body transformation).

Do these vegan models inspire you? You can also start achieving this by creating your own vegan workout routine.