Skip to content
Home » Nutrition » Vegan Butter vs Margarine: What’s the Difference?
a

Most grocery store dairy aisles offer three types of spreads advertised to taste “buttery.” All grocery stores sell butter and margarine, and most but the smallest grocers also carry one or more vegan butter brands.

Butter comes from cream, the highest-fat layer that rises to the top of raw milk. Many people are allergic to elements in milk that make it into butter and have to avoid it. Some margarine can also contain ingredients derived from milk.

When comparing vegan butter vs margarine, vegan butter is the safest choice for people with dairy allergies or lactose intolerance because it won’t contain either.

Margarine and other products might state “dairy-free” or “non-dairy” on the label. The FDA doesn’t monitor which companies can use dairy-free on their brands, and though the term non-dairy is regulated, those products can still contain some milk ingredients.

The differences between vegan butter vs margarine can be a problem for people with allergies or those who follow a vegan diet. Unfortunately, those differences aren’t always obvious when comparing the labels.

What Is Vegan Butter?

Vegan butter is a type of margarine that doesn’t contain animal products. The primary ingredients in most commercial brands of vegan butter are one or more plant-derived oils.

The most common oils found in vegan butter are canola, olive, coconut, palm, flax, sunflower, and soybean. Most brands contain a blend of two or more of these oils. Even when the package states that the butter is an olive oil spread, it usually includes another oil blend.

Homemade recipes for vegan butter often use a mix of oils like coconut and canola oil with ingredients like apple cider vinegar and soy milk or other plant-based milk.

Vegan butter is available in standard, light, and fortified varieties. Some vegan butter is cultured, which means it uses probiotic live bacteria to culture the plant milk in the same process that turns dairy and plant milk into thick, tangy yogurt.

The lecithin in vegan butter typically comes from soy or corn, and the lactic acid comes from fermenting sugar from corn or beets. If the product says it’s vegan, those ingredients won’t be animal-based.

Today’s margarine is a butter substitute spread made with vegetable oils instead of dairy milk, though the original recipe for margarine contained some milk.

A French chemist created margarine in 1869 as a stable and inexpensive butter substitute to feed workers and soldiers during the Franco-Prussian wars. A mixture of beef fat rendered into tallow and milk made the butter more stable and gave it a longer shelf-life.

In 1902, a German scientist created the process of hydrogenation to harden oils which allowed them to make margarine from vegetable oil instead of beef fat, making it even less expensive to produce.

Though margarine contains at least 80% of its calories from fat, the type of fats in plant oils are healthier than the saturated fat found in butter. So marketers advertised margarine throughout the mid-20th century as a healthier option.

The FDA banned artificial trans fats in the US in 2015, so margarine today is generally trans-fat free with vegetable oil blends solidified without hydrogenation. Depending on the local food-related regulations, margarine and products in other countries may still contain artificial trans fat.

Is There Really a Difference?

Since vegan butter is a type of margarine, it’s easy to think there’s no difference between these products. But in the vegan butter vs margarine debate, one key difference is important to anyone following a vegan diet.

A common animal-based ingredient in margarine is whey, one of the two proteins found in milk. This liquid is a pale yellow by-product of cheese production. Straining curdled milk and milk products is the only way to produce whey.

People can make whey at home by pouring dairy yogurt into a cloth and allowing the whey to drip from the yogurt into a bowl for several hours. The yogurt left will be lumpy curds with the tang of cream cheese.

This strained whey is the process referenced in the Little Miss Muffet fairy-tale of separating curds and whey.

Whey protein appears in protein powders, spreads, and baked goods because it acts as an emulsifier to thicken and combine ingredients. If the ingredient list of margarine lists whey, the product is not vegan.

Vitamin D2 is plant-based, but Vitamin D3 can come from lichen, a plant, or the lanolin in sheep’s wool. Most ingredient lists don’t distinguish between Vitamin D2 and D3, but Vitamin D3 is the less expensive and more commonly used additive.

The only way to know if food isn’t labeled vegan is to ask the manufacturer. However, most Vitamin D added to food products comes from the lanolin found in sheep’s wool, so it’s safe to assume that a product containing it isn’t vegan.

People following a plant-based diet might not be concerned about the source of the vitamin since it isn’t milk, meat, or egg-based. Ethical vegans typically avoid lanolin because it still comes from an animal, but it’s an individual choice each person has to make.

Casein, like whey, is a milk protein. It can appear on a list of ingredients as casein or sodium caseinate. Casein can also be part of the “natural flavors” with other dairy and animal products the manufacturer doesn’t have to include on the label.

Lactose is a sugar found in dairy milk. It can appear in an ingredients list or under the “natural flavors” label.

Typically, if the product claims to be non-dairy or dairy-free, it can still contain lactose and sodium caseinate but must list them in the ingredients and point out that they’re milk-derived ingredients.

When comparing vegan butter vs margarine, scan the margarine label for these ingredients. If the product doesn’t list them, look at the allergen warnings. The manufacturer often points out that it contains milk when there’s no apparent milk-based ingredient.

In this case, there could be casein or lactose in the product’s “natural flavors” ingredient, making it unsuitable for people with dairy allergies or lactose intolerance and those following a vegan diet. 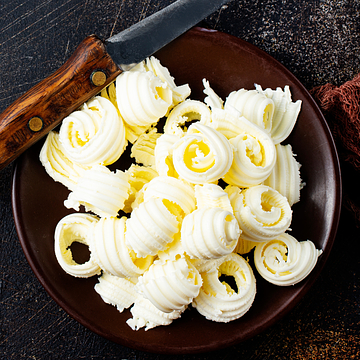 Which One Should I Use?

Dietary vegans might not take issue with Vitamin D from lanolin because it doesn’t require animal slaughter (though the mistreatment of sheep is an important issue) and isn’t meat or milk-based. But ethical vegans should avoid products fortified with Vitamin D unless they’re labeled vegan.

The Issue of Palm Oil

Some vegans may wish to choose a vegan butter that doesn’t contain palm oil. Many ethical vegans avoid palm oil because of its harm to animals.

Palm oil doesn’t contain animal products, but the palm industry contributes to deforestation and animal harm. The damage it does to the rainforest seriously threatens several native and endangered species like the orangutan. 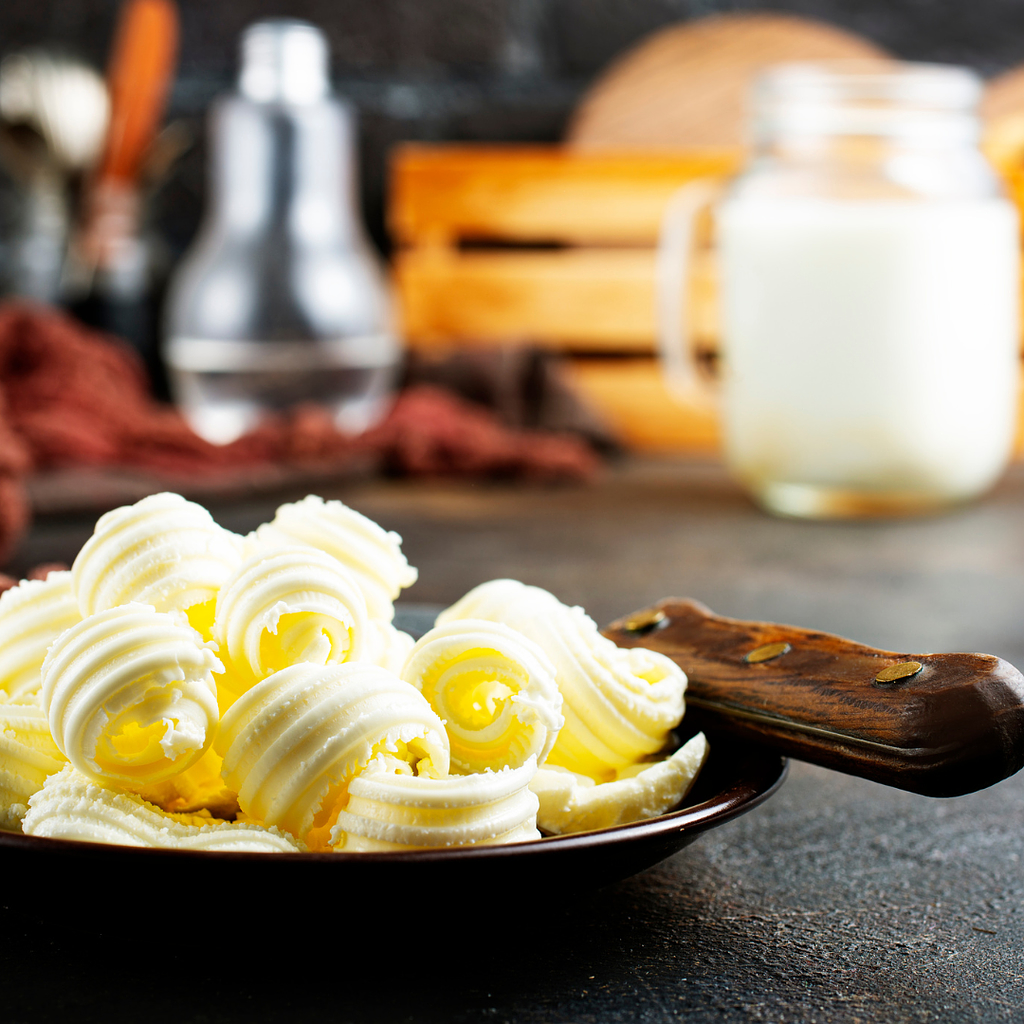 When trying to figure out the best margarine brand, reading labels is important if you want to avoid all animal products. You can rule out many margarine brands that list whey on the label.

Others are more difficult, with hidden animal-based possibilities like Vitamin D and natural flavors. When in doubt, you can check the allergen warning, which often, but not always, lists milk if a milk-based ingredient is in the group of natural flavors.

In the US, not all vegan foods advertise as vegan or plant-based, so it’s possible to find margarine that doesn’t list milk in the allergens and doesn’t contain Vitamin D that’s accidentally vegan. But you can remove any risk of consuming animal products by sticking with vegan butter.