If you're trying to eat vegan or vegetarian dishes, Mexican food is an excellent choice because it's so versatile and easy to make. While there are tons of vegetarian and vegan Mexican dish options, we'll be looking at four recipes:

Join us on a culinary exploration of these dishes and how they can improve your health without sacrificing flavor or fullness.

Empanadas date back to the mid-1500s in Catalonia, Spain. They're thought to originate from the Moors, who invaded and controlled Spain for several hundred years. The first recipe dates back to 1520, and it was for a seafood-filled empanada.

This dish is traditionally Spanish and Latin American but not necessarily "Mexican." Still, it's an excellent option for those who want vegetarian items that are tasty and easy to make.

What You'll Need for the Empanada Dough

What You'll Need for the Filling

What You'll Need to Assemble Your Empanadas

Step One: Make the Dough

You can serve them hot or wait for them to cool to room temperature. They're also good with spicy cream sauce, like a chipotle aioli.

Bean salad is already pretty vegetarian, and you can make this recipe vegan by cutting out the cheese and other animal byproducts. As a Mexican-style dish, you get a bit of spiciness to accentuate your beans and vegetables. This is also one of the simplest recipes as it doesn't require baking, broiling, or sauteing.

For Your Chili-Lime Juice

Step One: Mix Your Vegetables

Be sure to drain and rinse your beans before mixing them since bean juice can throw off the flavor and texture of the salad. Then, mix each bean with a chopped avocado, a can of drained and rinsed corn, white onion, bell pepper, and cilantro. Mix the ingredients until they're well blended.

You'll notice we didn't add amounts to the lime juice ingredients. Instead, just mix an even amount of each item until you like the flavor, then pour it over your bean salad and toss everything together.

Once the salad has chilled for a bit, you can pull it out and enjoy it whenever you like. To mix it up a bit, feel free to add shredded cheese, hot sauce, or chopped tortilla chips to add a bit of crunchiness and saltiness.

Technically, unless you add meat to your quesadilla, all recipes are vegetarian. If you want your quesadilla to be vegan, you'll need to use vegan cheese and avoid butter. Otherwise, it's very easy to push this recipe into vegan territory if you like.

Step One: Cook Your Vegetables

Put one tablespoon of olive oil in a frying pan and cook all the vegetables until they're sauteed. Then, add the cumin, chili powder, and any salt and pepper you want, and cook until the seasonings blend into the corn, beans, onion, and bell pepper. After removing the mixture from heat, add the cilantro, so it doesn't wilt and get too slimy.

Put a flour tortilla on the bottom of a frying pan. Add half of your cheese, then a layer of your cooked vegetables, more cheese, and another tortilla. Cook until both sides are golden. You should only have to flip the quesadilla once during this step.

You can add salsa, sour cream, or any other sauce to your quesadilla to make it even tastier. We recommend a chipotle ranch or something similar that adds some creaminess and spice to the mixture.

Empanadas date back to the mid-1500s in Catalonia, Spain. They're thought to originate from the Moors, who invaded and controlled Spain for several hundred years. The first recipe dates back to 1520, and it was for a seafood-filled empanada.

One element of Mexican dishes is refried beans, which work well for burritos, quesadillas, or just on the side. However, traditional refried beans are not vegan because chefs use lard or meat to season the mixture. However, if you make them at home, you can use vegetable oil instead to ensure a vegan recipe. 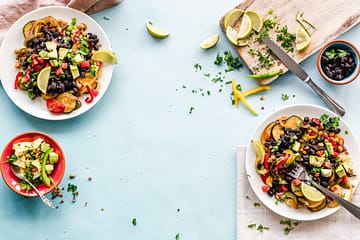 The best beans for refrying are pinto, but you can use pretty much any bean you like. Simply heat them with water until they're soft, then mash them with a potato masher. If you don't want your refried beans too chunky, you can use a food processor. Once they're mashed, reheat them in the same skillet, adding any seasonings for flavor.

To improve the taste of your vegan refried beans, feel free to add onions, garlic, oregano, and lime juice to the mix when cooking the beans the first time. Most of these ingredients should caramelize and mix with the beans, so they're not too noticeable when eating (but their flavor remains).

As you can see, it's easy to do Mexican food with a vegetarian or vegan diet. While you might have to get creative with some items, these dishes will keep you and your family coming back for more!

No, but there are many vegan cheese substitutes available that you can use to substitute.