Asian food is filled with savory flavors that are known to many as umami. It's a mixture of salty, sweet, spicy, and sour all rolled into one. The best vegan Asian dishes still keep this umami flavor intact while serving you a healthy meal without any meat protein.

In this blog post, we will discuss which Asian dishes can be made vegan and why you should try them out. We will also provide tips on how to cook each dish perfectly.

The same delicious meals you order from your favorite local Asian restaurant can probably be made vegan in your home with the right ingredients.

Below are common Asian ingredients and recipes you can use to make a variety of different meals.

Eggroll wrappers are made of flour, water, and salt. Most places will add some egg mixture to the wrapper but it's entirely optional if you are trying to stay vegan.

You can get incredibly creative with eggrolls as a vegan so this ingredient has a lot of potential. 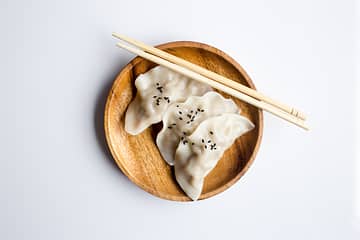 You might as well be asking yourself are vegetable dumplings vegan because you won't be adding any meat to these appetizers.

The answer is yes, as long as you get a vegan wrapper to enclose the ingredients.

The questions, "Is ramen vegan?" and "Is top ramen vegan?" are all essentially the same. You can make your ramen noodles vegan by avoiding the seasoning packet that comes with it.

These are typically full of MSG and other non-vegan ingredients. You can find vegan ramen at some specialty stores but it might be easier to just make your own.

It probably won't be as good as an instant pot vegan stew but the flavors will still warm you on a cold day.

If you aren't familiar, yakisoba noodles are a type of Japanese noodle that is typically served stir-fried.

The good news is that most yakisoba noodles are vegan, however, you will want to check the label to be sure. The same goes for soba noodles.

Because soy sauce is entirely plant-based, it is considered vegan and safe to eat if you are following the diet.

As long as the plant in which the soy sauce was made is using vegan-friendly production techniques and there is no chance of cross-contamination, it is safe to eat.

Thai curry is made with a variety of different spices and ingredients that are typically vegan-friendly.

The main exception to this would be if the curry contains fish sauce, as this is not vegan.

However, there are many recipes for Thai curry that do not use fish sauce and are therefore suitable for vegans. You can substitute tempeh or tofu to create a similar protein-rich meal.

Yum yum sauce is a dish that is often served with sushi. It is made of mayonnaise, vinegar, sugar, and chili pepper.

Now, there are plenty of recipes you can find that sub out the mayonnaise in order to make this sauce vegan-friendly.

Chinese takeout is always a favorite in households and it doesn't take much to transform it into a healthy Chinese vegan meal.

Use vegan meat substitutes such as seitan, tofu, or tempeh to create a delicious and hearty dish.

You may not be able to go fully vegan when you first transition your diet. Finding the correct ingredients and making meals you like may take time.

If that's the case, try out one of the following Asian vegetarian dishes:

These recipes are all hearty, filling, and will give you a taste of what vegan Asian cuisine is like without all the rigidity.

Asian food specializes in mixing together a variety of flavors to create unique and memorable dishes.

As a vegan, you have the opportunity to be even more creative with your cooking. Here are a few tips to get you started:

Asian recipes make it easy to get incredibly tasting vegan food without much effort due to the number of spices and savory flavors used.

What is Asian vegetarian meal?

As long as you already have the ingredients, Asian vegan meals should not take any longer than ones with meat. The cooking times might even be faster since you don't have to wait for the meat to cook thoroughly.

Does it cost more to make vegan Asian dishes?

Asian vegan dishes might cost less than ones with meat because many of the ingredients will be inexpensive like grains, beans, or produce.