KFC Vegan Chicken Beyond Meat Review
Is This New Menu Worth It?

On August 27th, in the Cobb parkway restaurant in Atlanta, the KFC was painted green for the trial of its plant-based alternative to chicken.

The queue was huge, with some waiting hours for a chance to try this “Kentucky Fried Miracle” food. The restaurant sold out of the vegan nuggets and boneless wings in just five hours.

The meat (see also ‘Is Vegan Meat Healthy?‘) of the animal-free options was provided by Beyond Meat, an American company based in Los Angeles that specializes in cruelty-free alternatives to beef, chicken, and pork.

The success of this trial bodes well for a rollout of the product nationwide with the trial selling more in five hours than the fast-food chain (see also ‘Does McDonald’s Have Vegan Or Vegetarian Options?’) sells in regular popcorn chicken in a week.

Trial Of The Imposter Burger In The UK

This US trial follows on the back of similar market assessment in the UK, where they offered a bespoke Quorn fillet coated in the Colonel’s famous recipe of herbs and spices with lettuce (see also ‘What Lettuce To Use for Tasty Vegan Wraps‘) and vegan mayo and served in a soft bun. The vegan-friendly chicken sandwich offering racked up sales around 500 percent higher than the typical new KFC sandwich.The market is definitely hungry for more with both trials selling out in record numbers, so it probably tastes great, and hopefully, we’ll see vegetarian and vegan chicken options rolled out in our local KFC restaurants soon. 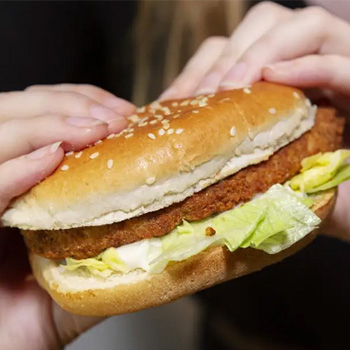 We knew there were plenty of people who would want to get a taste of the Imposter, but we didn’t anticipate this phenomenal response,”

What Is It Made From? 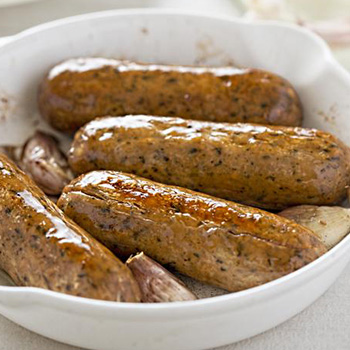 The “chicken” that goes into the plant-based options at KFC is made by Beyond Meat in the USA and Quorn in the UK.While the ingredients for the vegan chicken are not readily accessible right now, if it follows the rest of the Beyond Meat product line, it should be primarily a pea protein-based product. The Quorn meat used in the UK trial, on the other hand, is sourced mainly from soy. They are both processed foods, and you should check the ingredients list yourselves once they go into mainstream circulation.

Is It Any Healthier Than Real Chicken?

Let’s start off by stating that KFC is never going to be a healthy option. It is a fast-food chain (see also ‘Vegan And Vegetarian Options At Your Favorite Restaurants‘) and, as such, should be eaten sparingly. Yes, the meat-free option is marginally better for you than the chicken corpse alternative, but only slightly.

It is still wrapped in bread, deep-fried, and high in calories and saturated fats.Also, soy is one of the most common allergens. So those afflicted by that allergy will want to give the Quorn vegan chicken a miss; it is, however, a “whole” protein containing all 9 BCAA’s, which makes it an easier option for those after that protein.

The Beyond Meat option is not a “whole” protein as it is derived from peas, but again, how many weight lifters or professional athletes are using KFC as a primary diet source?

Is Going To KFC Ever Really Vegan?

Technically, yes. The Imposter Burger and the Kentucky Fried Miracle chicken nuggets are entirely plant-based and vegan-friendly, but it’s not just about how it tastes or what it’s made of. There is an ethical dilemma at the heart of the discussion on whether supporting a business that has such an atrocious track record in regards to animal welfare. KFC slaughters countless numbers of chickens every year, and animal-driven ethical organizations have repeatedly attacked the company and its practices. 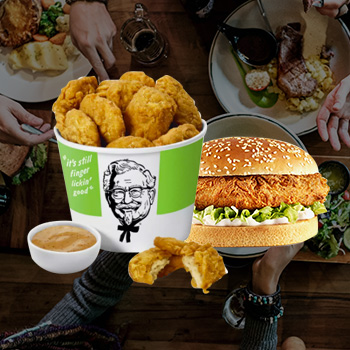 Does KFC have vegan fried chicken?

KFC has trialled vegan fried chicken products (see also ‘The Best French Fries For Vegans‘) in both the US and in the UK. In both instances, the products were hugely successful selling out in record numbers, especially when compared to their meat-based alternatives. There are still no definite dates as to when these plant-based products will be released to KFC customers as a regular offering.

Are the mashed potatoes vegan at KFC?

Yes, the mashed potatoes at KFC are vegan if ordered with no butter (see also ‘Is Margarine Vegan?‘). In fact, all of the sides are vegan-friendly if specifically asked to be. This goes part of the way to making up for the lack of a vegan option in the main menu, at least until the vegan fried chicken makes its full-time debut.

No, KFC’s gravy contains chicken crackling (chicken fat), and so is not suitable for those on either a vegetarian or vegan diet.

Is The Vegan Fried Chicken Worth The Hype?

With such a limited test run and with the product selling out so quickly, very few customers have actually had the chance to try the plant-based KFC options.

The feedback, so far, has been overwhelmingly positive. As a vegan and ex-KFC addict myself, I can safely say that given the opportunity, I will have to check out how finger-lickin’ good it is myself at the earliest opportunity.Is it really vegan though? As stated above, anyone following the diet for strictly ethical or environmental reasons is going to say no. But perhaps in choosing the plant-based alternatives and having them gain popularity over the meat menu, the company might make some changes to its practices.Were you one of the lucky few who were able to try the vegan fried chicken or the Imposter Burger (see also ‘Best Vegan Burgers for BBQ’)? How was it? Let us know in the comments below.