Is Hummus Vegan & Dairy-Free?
Here’s Everything You Need to Know

This Middle Eastern spread is not only delicious, but it’s also versatile. Use it as a spread on sandwiches and tortillas, dip veggies, pretzels, and crackers in it, or add it to salads. There’s practically nothing you can’t do with hummus. But, can this chickpea deliciousness ever be off-limits to vegans? Brace yourselves, I’ve got the answer!

Table of Contents
What is Hummus? Why do Vegans Love It so Much? Hummus Ingredients
4 Things That Make Hummus Non-Vegan
Is It Healthy?
Nutrition Facts
5 Vegan-Friendly Brands
1. Sabra 2. Lantana 3. Hope Foods 4. Roots 5. Athenos
Quick Homemade Hummus Recipe
What to Eat with Hummus
FAQs Is Hummus Vegan? The Final Verdict 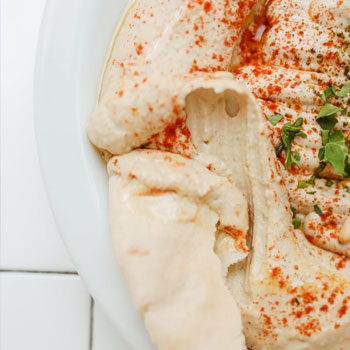 As I mentioned, hummus is a Middle Eastern dish enjoyed all over the world. However, it's most popular in Turkey, Greece, Africa, Cyprus, Israel, Syria, Palestine, Iran, Iraq, Jordan, and Lebanon — the territories also known as the Levant.

There's not a person that hasn't heard of hummus. Many enjoy it but don't know what it is.

Every region has its variation of the dish, but is hummus vegan? Yes! Hummus is vegan — almost always.

There are different hummus recipes and other ideas of what the perfect hummus should be like. Still, there are two constants: chickpeas and tahini (sesame seeds butter).

“The emotive power of hummus all over the Middle East cannot be overstated, being the focus of some serious tribal rivalries”

The name of this tasty dish comes from the Arabic word from chickpeas. Still, the dish’s actual name is hummus bi tahini, which means "chickpeas with tahini.”

Why do Vegans Love It so Much?

Vegans (and a lot more non-vegan people, as far as I know) love hummus for two reasons:

Hummus is often considered raw and plant-based, which makes it perfect for the vegan diet. It typically doesn’t have additives, and you can also find low-carb versions.

These ingredients are blended into smooth and creamy deliciousness we adore. Naturally, hummus may have additional ingredients like:

There are many creative alternatives to the classic hummus, and you shouldn’t be afraid to try them all.

Some hummus variations from grocery stores may contain dairy products or even animal products, making the hummus non-vegan.

The most common hummus ingredients that could make it not vegan-friendly include:

Now, as you probably know, palm oil isn’t non-vegan per se. However, it’s surrounded by many ethical and environmental issues. It’s a controversial ingredient that has divided the world of veganism. Some vegans consider it vegan; some avoid it.

Sugar is another controversial ingredient. First and foremost, it shouldn’t even be added to hummus. However, if there is sugar in hummus, it raises the question of whether it’s been processed with bone char.

Stabilizers, emulsifiers, and other similar additives are often included to make the hummus even smoother or prolong its shelf life. Some of them aren’t vegan and aren’t even labeled as such.

Now, a store-bought hummus may include all the vegan ingredients. However, there still may be an issue of cross-contamination or cross-contact.

This could happen in factories where food that contains dairy and animal products are made, as well. If the hummus you’d like to purchase isn’t clearly labeled as vegan, I’d advise you to do thorough research on the company. 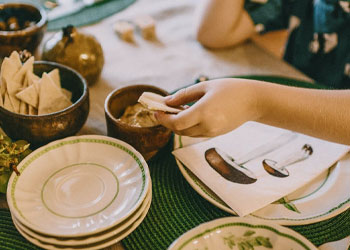 I know it's incredible something so tasty is healthy, but the facts confirm it! Let's see why hummus is so good for you:

Chickpeas are packed with protein and fiber. Just one cup of chickpeas contains:

Many worry about calories from tahini and olive oil. But, contrary to the widespread belief, hummus aids weight loss. The combination of fats and fiber from olive oil and chickpeas helps you manage weight and curb some cardiovascular risk factors [2].

Researchers have found that people who eat hummus regularly have lower BMI and body weight. Hummus also keeps you full longer and curbs your appetite, resulting in weight loss.

To help you choose vegan-friendly hummus, here are a couple of vegan brands I like to have on hand when I’m too lazy to make hummus.

Sabra has vegan and vegetarian hummus, so be careful when choosing. However, all their flavors are non-GMO, gluten-free, and kosher. The brand’s vegan flavors include:

All of Lantana’s hummus flavors are vegan, non-GMO, and gluten-free. All of them are also kosher, except for the Hatch Chile. They offer:

All Hope Foods’ hummus flavors are gluten-free and vegan. They include:

All Athenos hummus flavors are vegan and include: 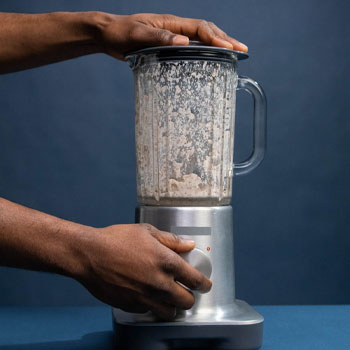 Vegan hummus is quick and easy to make. If you want to eat well, enjoy life, you’ll need a couple of ingredients and a food processor.

Now, there are many different hummus recipes, but this is one of my favorites. To make hummus at home, you’ll need:

Put the chickpeas and about a half of the aquafaba (chickpea water) from the can into a food processor. Add everything else to the processor and blend until smooth. You could also add pine nuts, red peppers, or any other ingredient and spice you like and make your blend.

Spread it on a nice plate, garnish with some oil and chickpea beans, and serve with warm pita bread or cut-up vegetables. Serve it as a dip, spread, main course, or appetizer.

What to Eat with Hummus

You can eat hummus with anything you like. Spread it on some whole grain bread, dip pita chips, (vegan) pretzels or veggies in it, put it in a salad, tortilla, or a wrap. You make the rules, you set the limits.

Yes, there are many vegan shop-bought hummus flavors. Just make sure you read the label carefully and avoid controversial ingredients.

What hummus brands are vegan?

Sabra, Lantana, Hope Foods, Roots, and Athenos are just some of the many vegan brands you can find in stores and online.

Is Hummus Vegan? The Final Verdict

Hummus is vegan. You can munch on it guilt-free, but only if you make your hummus at home.

If you decide to buy it, be careful about the ingredients. Feel free to share your favorite hummus recipe in the comments or recommend your favorite brand and flavor!