Everything that is conducted throughout the body is done through messaging. These messages become more urgent through various methods but are primarily delivered in an extremely important way: the endocrine system. The endocrine system is responsible for every synapse that occurs, such as moving your fingers, running, and even getting up in the morning. The body uses hormones to both incentivize and move. Think of it like a stick-and-carrot system. The hormones need to move around a certain way, and this is done through a hormone secretagogue.  When athletes or patients are looking to improve themselves, sometimes it isn't the stick or the carrot - but the method which delivers these things to them.

In this article, we will talk about Ibutamoren - one of the most closely looked at hormone secretagogues. We will first explain what Ibutamoren is, and its purported benefits. Finally, we will take a look at the proper time and place to take Ibutamoren.

Ibutamoren is a hormone secretagogue - and its primary function is to deliver human growth hormone throughout the body. This isn't the same as the synthetic version you have heard about which is directly injected into the body.

Ibutamoren does not directly affect the hormones within the body with a foreign substance, it just controls the levels at which your body naturally creates it, and tells it where to go.

Our bodies constrain an amino acid called Ghrelin. Ghrelin is released from the gastrointestinal endocrine system - the part responsible for releasing signals to the body from hunger. Ghrelin can also be released from other organs, such as male and female gonads, kidneys, and, of course - primarily the stomach. Ghrelin is directly responsible for releasing human growth hormone throughout the body - and Ibutamoren seems to be a much better way to stimulate this receptor.

As can be seen, Ibutamoren can have an enormous number of great effects on those who are suffering from certain diseases that are affecting the way the receptors are stimulated throughout the body, as well as those who are suffering from a lack of human growth hormone. Below, we will take a look at the purported benefits that Ibutamoren is said to have.

What are The Benefits of Ibutamoren?

Encourage Muscle Growth and Recovery:  As the name suggests, the human growth hormone is the hormone that helps with the development of our muscles within the body. It does this through the messaging system of the ghrelin receptors, which Ibutamoren directly stimulates. It not only increases muscle development but helps in the process of recovery as well. Human growth hormone increases protein synthesis in the positively affected area - which means that the muscles rebuild themselves stronger after a long workout.

Improves Bone Health: While human growth hormone helps to increase muscular development, it helps in other areas as well. Officially, Ibutamoren is being looked at as a preventative therapeutic medicine that can combat wasting and degenerative diseases, chief of which are things that atrophy the muscles or affect bone density loss. An increase in human growth hormone and a proper delivery system can help improve bone health and guard against such common things as osteoporosis and arthritis.

Stabilizes Body Weight and Cardiac Problems: Ibutamoren also helps to minimize the effects of aging on the body, improves sleep, helps to heal future and current wounds, and lowers LDL (bad) cholesterol. It also helps to improve your sleep patterns by both assisting in falling asleep and staying in a deep sleeping state. This can have many health benefits, of which improved cardiac health is paramount. The increased release of human growth hormone directly encourages the cells to build up stronger and faster - meaning cells are powering their metabolic burn to match the need for increased resources. This can directly affect glucose levels and helps to burn fat at an extremely accelerated rate.

It is important to note that MK677 (Ibutamoren) is currently under review and further being researched as a potential way to combat muscle-wasting diseases. This means that approved human trials have not yet been done, and there isn't significant evidence as to how this should be administered. Some blogs and articles claim that taking 25 milligrams daily on an empty stomach in the morning can produce the best effects and that it should be cycled for 8-12 weeks on and off.

These can be neither confirmed nor denied, as there isn't sufficient research to prove what they are saying. Furthermore, unless you are purchasing Ibutamore for lab or research purposes, it cannot be used for medical, athletic, or clinical reasons. 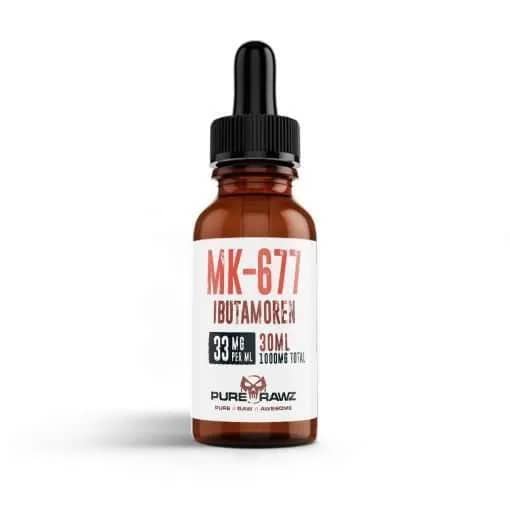 Ibutamoren can be illegal to possess without an approved reason. Furthermore, it is classified as a performance-enhancing drug and is banned by WADA, meaning it cannot be used for athletic competitions or performances. Ibutamoren is still in the clinical trial phase, which means it has not yet been approved by the FDA to be prescribed by any medical practitioner or sold in any drug or supplement.

Where can I buy ibutamoren??

PureRawz contains most supplements, including Ibutamoren, Ostarine, SARMs, and other substances that are conducive to athletic performance and study. Their products are all close to 100% pure. PureRawz only sells Ibutamoren for research or laboratory use only.

So far, research has shown that the half-life of Ibutamoren is 4-6 hours. This means that dosages should be broken up to 4 times a day for maximum use. There is insufficient evidence as to how long cycles should last, but most speculate that it is between 8-12 weeks on and off.