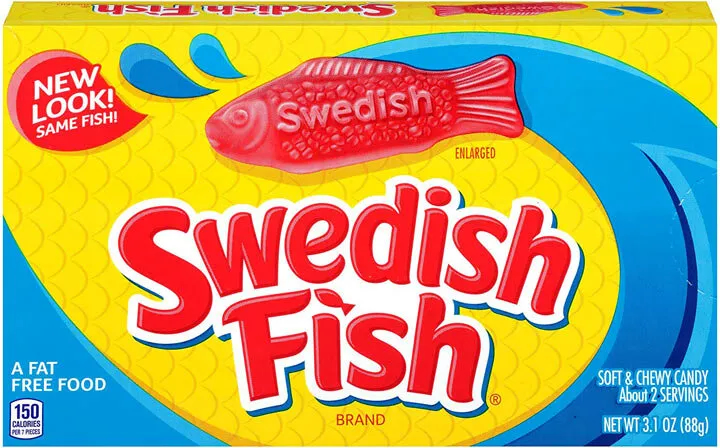 Swedish Fish have been a popular confection since the mid-20th century. Since it is a gummy candy, you may be wondering: Are Swedish fish vegan?Yes! Swedish Fish are a vegan treat that vegan dieters can enjoy. Bodybuilders can benefit from consuming the confection as well.

What Are Swedish Fish?

The confection hit the market from its original manufacturer Malaco in the 1950s. It is a red fish-shaped candy with scales and an eye on it to make them look like real fish. Each candy has the word “Swedish” to show off its brand name. You can find the candies in a yellow box or bag in your local candy aisle. A Swedish Fish is swimming upward from the blue water pictured on the bottom of the packaging to the top part.

Consumers and researchers have debated the flavor for a long time. Swedish Fish are lingonberry flavored, sourced from European countries such as Sweden and British Columbia. However, lingonberries also grow in the United States in the Pacific Northwest throughout Washington, Oregon, and Idaho.

Hence its name. The candy originated from Sweden. The Swedish-based company, Malaco formulated the candy to interest North American consumers. The brand grew more popular as Americans purchased them heavily in the 1960s and 1970s.

Mondelez now owns Swedish Fish in the United States. Cadbury Adams is the affiliated manufacturer with plants throughout Turkey and Canada that create the fish-shaped sweet treat. Malaco continues to make the candy for its Swedish customers. 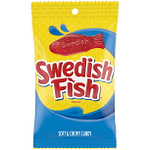 Rather than use gelatin to form the Swedish Fish gummy candy, the company utilizes carnauba wax mixed with modified corn starch and corn syrup to mimic a gummy-like texture.

There is one caveat about Swedish Fish products. Some of the Swedish Fish varieties contain beeswax rather than carnauba wax.

The original version contains carnauba wax, which makes it vegan. However, if you want to try a different Swedish Fish flavor or variety, check the nutrition label to be sure it does not contain beeswax. If beeswax is on the ingredients list, it is not a vegan food as this ingredient comes from an animal. So are Swedish Fish vegan? In short, yes! If gelatin were in the gummy, it would not be a vegan product.

Why Is Gelatin Not Vegan?

Gelatin comes from hydrolyzed collagen. You can find collagen throughout bones and skin or animal hide. Collagen also comes from the white connective tissues that bind together the muscles in an animal body.

If animal hides are decaying, food scientists will extract collagen from them. The bones from cows, oxen, bison, and other cattle are crushed down and boiled to extract the collagen and create gelatin. Pig bones are an alternative collagen source.

Vegans do not consume meat, dairy, or animal byproducts. Since the collagen that creates gelatin is considered an animal byproduct, vegans cannot consume food with gelatin as it would go against their dietary and moral principles of eating only a plant-based diet.

So how are Swedish Fish vegan if they’re gummies? Gelatin, a common gummy ingredient, is not present in the candy. Carnauba wax is the main ingredient that acts as a plant-based substitute for gelatin.

Carnauba wax, otherwise known as Brazil wax, comes from the Carnauba palm tree located in Brazil hence its name. It is an all-natural alternative to help structure gummies rather than using gelatin.

Vegans dislike the inhumane processes of crushing up and boiling animal bones to make gelatin. The carnauba wax undergoes a more humane process for extracting the resource from the Carnauba palm tree. 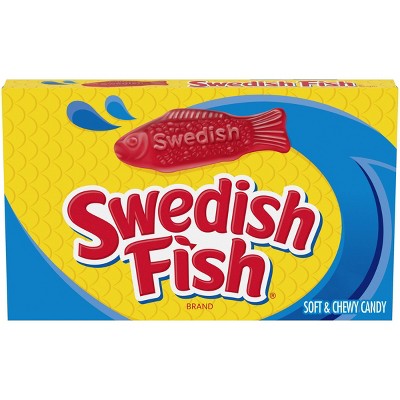 Modified corn starch is used in many foods to thicken and turn them into a gelatin-like consistency in a faster or shorter time. Not much is known about how Swedish Fish are made in the factory plants. However, the modified corn starch must be in the candy to act as another plant-based element for gelatin replacement.

Corn syrup is cornstarch in a different form. Manufacturers hydrolyze cornstarch to make corn syrup. Combining sugar with corn syrup helps to achieve the final shape and consistency of the Swedish Fish.

Other sweeteners may crystallize when combined with other liquids. The candy’s smoother texture is thanks to the corn syrup absorbing well in the candy liquid before being shaped into fish.

If you are having trouble finding Swedish Fish at your favorite supermarket or online store, there are many alternatives you can enjoy. The alternatives have similar ingredients which means they are also vegan confections like the popular Swedish Fish.

SmartSweet Sweet Fish looks strikingly similar to traditional Swedish Fish. They are both red and have carnauba wax, but SmartSweets creates their fish with different ingredients than Swedish Fish.

Instead of sugar, SmartSweet includes allulose in their Sweet Fish. While allulose tastes like sugar on your tongue, it does not act like how white sugar digests in your body.

You will feel better about eating candy during your workout when you try Surf Sweets Organic DelishFish. The cane sugar, tapioca syrup, carnauba wax, and cornstarch that create the confection’s gummy-like texture are all organic. Even the organic coloring from carrot and black currant are organic and plant-based sources. 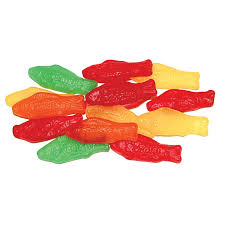 Eat five Delish-Fish to give your body 100 calories, 16g of sugar, and 24g of carbohydrates. Hence, you will have to eat seven less DelishFish to receive almost the same amount of calories and carbs present in 12 Swedish Fish.

How Will Swedish Fish Impact Your Gains?

Each serving of the traditional Swedish Fish candies is 110 calories for 12 candies. With 27g of carbohydrates, Swedish Fish will impact your gains as long as you consume them sparingly.

In one serving of Swedish Fish, there is 23g of sugar. If you eat Swedish Fish before a workout, it can cause a stomach ache. Sugar does not negatively impact muscle growth, but consuming less of it will give your body more nutritive value with the carbs and protein you consume instead.

Swedish Fish are a great intra-workout snack. Grab a small handful in between lifts to spike your blood sugar and keep you on top of your game while working out in the gym. The carbohydrates in the candy will break down into glucose and funnel into your bloodstream to give you the energy spike you need to power through your lifts.

Swedish Fish are vegan as long as they contain carnauba wax. Steer clear of the varieties that contain beeswax as these are not vegan. Consider Swedish Fish as an intra-workout snack to boost your carb intake and provide you energy between lifts. 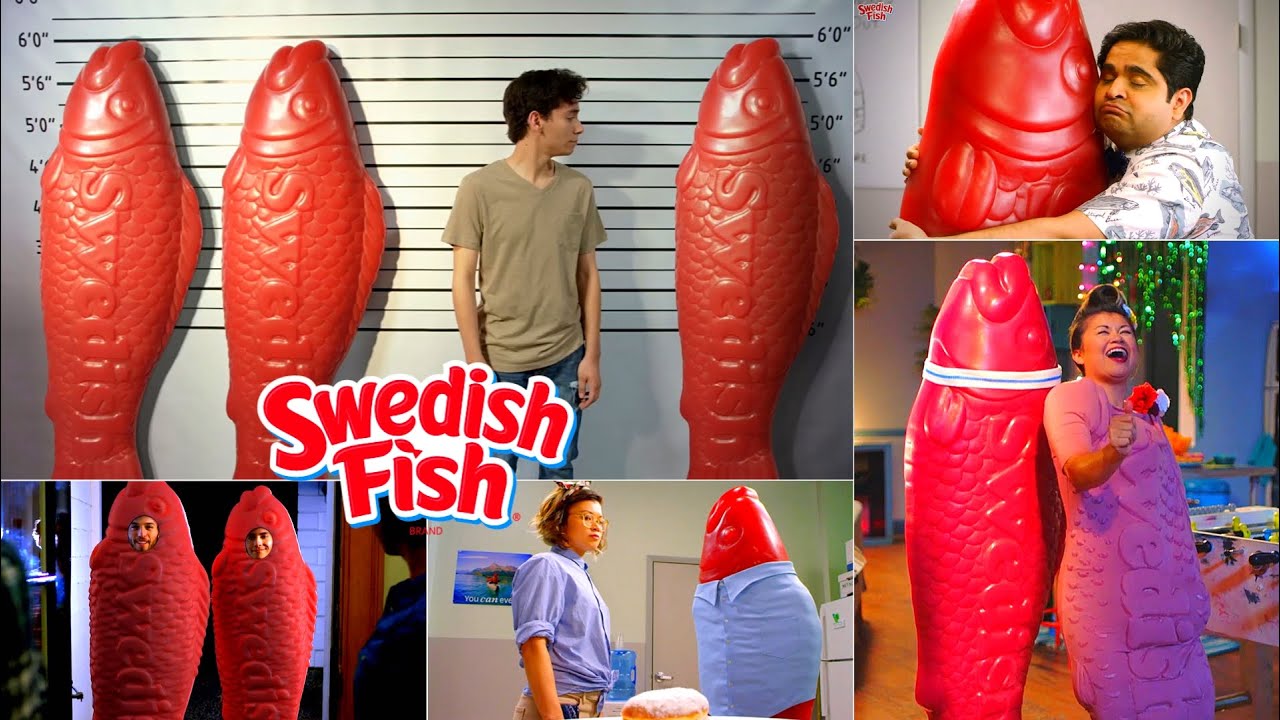