When you switch to a vegan diet and give up animal products, it's the little things that keep you going. Your favorite candies, snacks, or desserts being certified vegan can make the difference.

That's why when people first found out that PETA had given sweet candies like Sour Patch Kids or Twizzlers the green light, it was exciting. If sour patch kids are vegan, why can't all candy?

But are Sour Patch Kids Vegan? Unfortunately, it looks like PETA might have made a bad call. Let's take a closer look at these candies. 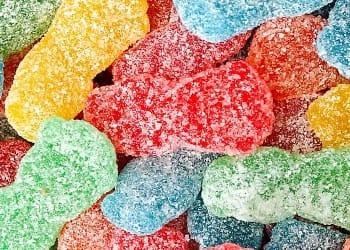 The short answer is no, and Sour Patch Kids are probably not vegan.

They are not certified vegetarian or vegan, and there are too many question marks around some of the ingredients to consider giving Sour Patch Kids a vegan label.

The only official endorsement that labels Sour Patch Kids vegan is from PETA, who have included it in a list of their favorite vegan candies.

Mondelez International, who make Sour Patch Kids, have not never claimed that they are free from animal products.

When "asking are Sour Patch Kids vegan," the first place to look is the ingredients in sour patch. Although as we will get into in just a moment, it isn't always as useful as you might think.

Let's take a look at the Sour Patch ingredients and then point out the problematic elements, either in inclusion or suspicious absence:

At first glance, there isn't anything instantly troubling with the ingredient list for Sour Patch Kids. It's easy to see why many vegans are under the impression that there are no animal ingredients.

At this point, we all know that gelatin is the number one problem vegan ingredient to look for in gummies or any other chewing candies like marshmallows. Even Skittles ditched gelatine in 2009. Whether derived from pork, beef, or fish, gelatin isn't even vegetarian, let alone vegan. But it isn't in Sour Patch Kids. Why am I talking about it?

There are claims online that Sour Patch Kids don't list their gelling agent in the ingredients. We would expect to see agar agar or pectin and that when contacted directly, Mondelez will tell you that the gelling agent is a proprietary blend. There are even some reports that Sour Patch Kids were found to contain 1% gelatin when dissolved in a lab.

I contacted them for myself, assuming there was no way this could be true, only to find out it is. The live chat agent told me that "Mondelez couldn't confirm the exact source of the gelatin in the candy because it's proprietary," and when asked point-blank if Sour Patch Kids contain gelatin, she answered, "yes."

For those new to a vegan friendly diet or the religion of checking labels, you may be surprised to learn that some sugars are not considered vegan friendly. This is because many refined white sugar companies use bone char to whiten the sugar.

While the bone char isn't found in the sugar itself, it is used in the manufacturing process, and most vegans will avoid the sugar altogether. It doesn't hurt that avoiding sugar also happens to be incredibly good for your health as a bonus. So from vegans worldwide, thank you, the sugar industry, for giving us no other choice [1].

While there may be a question mark still about whether gelatin is hiding somewhere in the Sour Patch ingredients, Mondelez themselves have confirmed their use of bone char in sugar. Although admittedly, it's one of those "how vegan are you" kinds of questions.

For vegans, the use of these numbered artificial flavors and food colors is another definite tick in the non-vegan friendly box for Sour Patch Kids. Artificial food flavors and colors are routinely tested on animals, from the usual suspects like rats and mice to man's best friend (and tortured experiment), the dog.

Animal testing isn't pretty, and whether the animals die directly due to the testing or not, they are terminated once the data has been gathered. For some reason, artificial colors go through systematic and periodic reviews as to their effects. They will always require further testing, so artificial colors and flavors are ingredients to avoid at all costs.

The most frustrating fact about animal testing is that the data provided isn't even useful. A growing number of voices in the scientific community are labeling it as needless and cruel [2].

No, I cannot see why Sour Patch Watermelons are any more vegan than Sour Patch Kids.

Let's take a quick look at the ingredients:

If that looks familiar to you, it's because it's precisely the same as the ingredients for Sour Patch Kids.

I should point out that there are regional differences in Sour Patch Kids, and Mondelez is an international company that does things differently in different countries.

The ingredients list for Sour Patch Kids in the UK, for example, openly admits that they use gelatin. The US Sour Patch Kids are not certified vegan or even Halal, which should raise a few more questions than it has.

There are different labeling laws in Canada and the US, which is likely how they can get away with not listing gelatin as one of Sour Patch Kids' ingredients.

If you look at the government website's exemptions, you'll find that there are many more workarounds that you might think [3].

Are Sour Patch Kids Vegan or Not?

After doing a bit more research and a deep dive into the ingredients, I think I can emphatically say that even for the vegans with slightly looser guidelines, Sour Patch Kids are not vegan.

The gelatin controversy and the animal testing on the artificial colors alone would be enough. But the use of sugar that the company themselves even admits uses bone char seals the deal. If this information comes as a bit of a shock or surprise and flies against the information you found elsewhere, I apologize.

But don't worry, here are the few tasty gummy candies that don't use any non-vegan ingredients.

Vegans, what is your favorite vegan sour candy? Do you know of any other non-vegan ingredients to keep an eye out for? Go ahead and let us know in the comments below.