Are Gushers Vegan? Here’s What We Found Out

Being a vegan is gratifying on many levels, but it also means taking on many new responsibilities. One such responsibility is intaking the right foods that align with your veganism beliefs.

Many vegans, especially newbies who crave sweets, always ask themselves whether gushers are vegan or not. At first glance, it might seem like Fruit Gushers are vegan because it contains fruit extracts, but no vegan wishes to take the risks of assumptions and what-ifs.

Therefore, to help you find the answer, we have extensively researched this topic to give a satisfactory conclusion.

Although Gushers Taste Great, Are They Vegan?

Unfortunately, the answer to this vegan question is not as simple as it may seem. Gushers are vegan, as opposed to common belief!

Gushers do not contain any animal products or byproducts, making them suitable for many vegan diets. However, some strict vegans do not qualify Gushers as utterly vegan because the candy contains ingredients relating to animal cruelty- directly or indirectly.

These chews contain sugar, glycerine, and palm oil, which may have been produced using animal byproducts or harm the environment. Thus, there is an ongoing debate surrounding these ingredients, and we shall dive deep into these dubious raw materials as the article proceeds.

What Are Fruit Gushers? 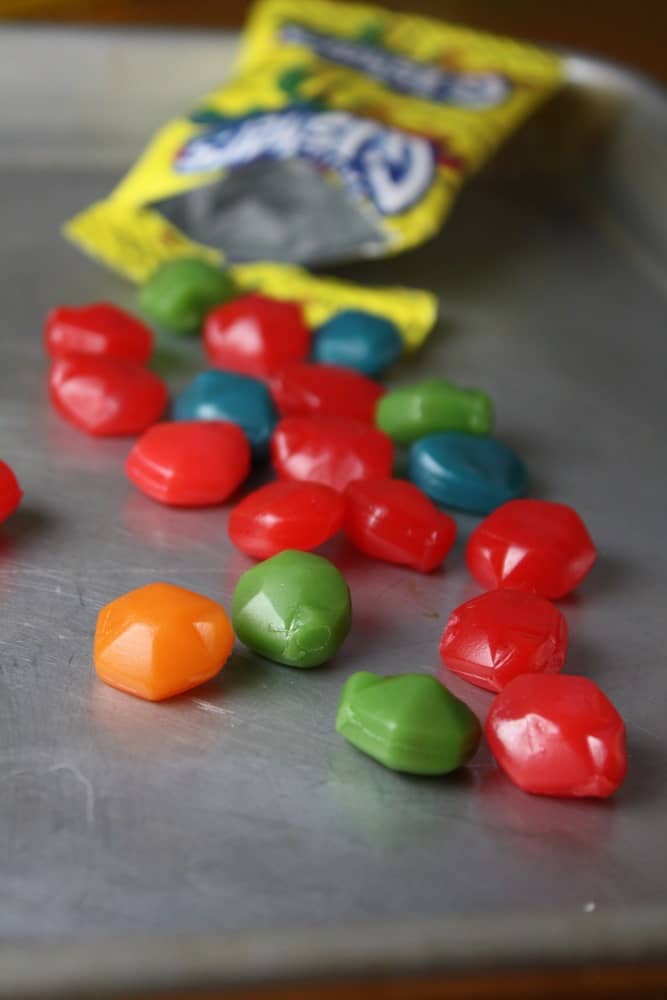 Fruit Gushers is a chewy fruit candy snack introduced by General Mills in 1991. The candy is technically sold under the Betty Crocker label of fruit snacks and is hugely popular in the US.

Its name originated because these tiny chews gush out liquid as soon as you bite the candy. The main ingredients are sugar and fruit juice, but the candy includes other components to form its classic taste, texture, and elasticity.

These Fruit Gushers are entirely devoid of gelatin, making the candy vegan.

A single pack of Fruit Gushers contains four flavors. From a glance, it is safe to say that these fruity chews are devoid of animal byproducts making the product vegan.

Their most popular flavor- Strawberry, also comes in a single pack, and the ingredients of that flavor are listed below:

As mentioned in the seventh point, it is safe to say that Gushers might be vegan, but as we dove deep, a few ingredients seem to jump out as 'not so vegan.'

These ingredients used in Gushers may look vegan, but upon closer inspection at the production and manufacturing of these raw materials, they can be deemed controversial by hardcore vegans.

We have compiled a list of dicey ingredients that may or may not be vegan. Despite being technically vegan, many of these products are manufactured or processed in linked with animal cruelty.

Glycerine is a syrupy, flavorless liquid used widely in food and fruit snacks as a preservative. Manufacturers can obtain glycerine from both animals and plants. Even though most manufacturers use plant-based glycerine today, many still prefer animal-based glycerine.

Animal-based glycerine is made using slaughterhouse fat. There is no indication on General Mills' website that the glycerine utilized to make this candy is vegan.

We have a hunch that the manufacturer might be using animal-based glycerine, making Gushers a non-vegan candy for consumption.

Palm trees produce carnauba wax, which many vegans approve of, but most vegans feel otherwise. Since palm trees are exploited while accessing the carnauba wax, it causes a direct impact on the animal habitats, thus affecting the wildlife.

Many hardcore vegans feel that carnauba wax products encourage corporations to keep looting the Earth and its resources.

Many vegans highly disprove unfair working conditions and general endangerments on the environment, which is common when carnauba wax is in the picture.

The palm tree is the source of carnauba wax and palm oil. Palm oil production is unethical and dangerous, yet not many vegans are aware of this. Beyond the issues we already mentioned above, this ingredient has even more problems.

The peat in palm trees is known to be released into the soils where they're planted. Peat releases a significant amount of methane from the Earth, which is a greenhouse gas. In addition to deforestation, peat also significantly contributes to global warming.

Modified corn starch is generally produced by using various enzymes, and the main issue is one cannot point out the exact derivation of these enzymes.

These enzymes are often produced by bacteria that are fed animal products. It is often more feasible and economical for capitalist manufacturers to get such enzymes from animals than plants.

It is hard to say whether the manufacturer used bacteria-based enzymes fed on plants or animals in such situations.

The monoglycerides found in plants and animals come in different forms. Even though it may seem like a minor ingredient, its presence in products is a problem for many hardcore vegans.

Unless you know the manufacturer's source for this ingredient, you may want to stay away from the products containing monoglycerides.

The knowledge of natural versus artificial flavors is crucial for vegans. The producers don't need to use what is expected of them when developing a product's taste.

Manufacturers can use such ingredients in raspberry and strawberry flavors to enhance their flavor. It has been speculated that this flavor might have been a part of the strawberry-flavor Gushers. Also, castoreum is not necessarily present in Strawberry Gushers, but many vegans feel it might be worth exploring.

Most food available on the market is made with artificial colors, a red flag for many hardcore vegans. Almost all synthetic dyes are tested on animals and have many health risks, so it may be best to steer clear of them.

Gushers can also contain food coloring, so it is best to read the ingredients to find out the exact kind. Many Gushers' flavors include Yellow 5, Blue 1, and Red 40 food coloring. These specific colors are notoriously infamous for their production process.

Additionally, coal, tar, and petroleum are all used to make Blue 1 and Red 40. These two food colors were eventually banned in countries like Belgium, France, and Denmark because of the ingredients used to manufacture these colors.

Even so, it doesn't appear that the United States will stop using these colors any time soon. Children with hyperactivity and allergies are known to suffer from allergic reactions caused by Yellow 5.

Although artificial colors are not derived from animals, companies must prove their safety for human usage by performing tests on animals. Many innocent animals such as rabbits, monkeys, rats, and even dogs are exposed to toxic doses of these colors to study the adverse effects.

Vegans thus avoid products that use artificial colors due to such blatant animal cruelty. If you avoid colorants such as Yellow 5 or Blue 1 in your diet, Gushers may not be considered vegan.

Vegans often avoid processed cane sugar because of the introduction of bone char during its manufacturing process. Many sugar processing factories in America use bone char as a whitening and bleaching agent.

To those unaware, bone char is composed of carbon residue when cattle bones are burned at high temperatures. Some vegans avoid processed sugar as an ethical responsibility because you never know where your sugar comes from.

In addition, it is possible that many processed sugar factories altogether avoid using bone char and use activated carbon instead. Many dedicated vegans have completely cut down their sugar intake to prevent the Russian roulette of bone char or charcoal.

Are Gushers Vegan? The Final Verdict

It is safe to say that Gushers are vegan in comparison with other candies. However, depending on your standards, you may find this chewy candy incompatible with your consumption choices.

Gushers are just as good to eat if you know they are made up of many artificial ingredients. Many vegans feel that any food is safe to eat as long as it does not contain gelatin, and if you believe in that school of thought, then Gushers are entirely vegan.

However, the other mentioned problematic ingredients are highly debatable. The Gushers' glycerine comes from an animal source that is unknown to you.

It remains a mystery that the company does not reveal other raw ingredients like artificial sugar, monoglycerides, and modified corn starch's exact process and ingredients.

Even though many vegans firmly believe Gushers use castoreum as a natural flavor, we did not find enough evidence to support this accusation. If you're worried about how the mushrooming palm oil plantations may affect the environment, then avoiding Gushers might make sense.

Looking at these ingredients and their limited transparency, Gushers aren't entirely vegan. But you have to realize that many factory-made foods aren't.

Some vegans look for animal-derived ingredients to consider whether the product is vegan or not. In contrast, others believe the product is suitable by examining its sustainability and indirect effects on wildlife and animals.

If you feel your veganism beliefs allow you to consume Gushers after knowing about these eight ingredients, we recommend eating these chewy candies. But if you do not want to take any risks, we consider removing this candy from your shopping cart.

Being vegan doesn't mean compromising on your love for an occasional sweet treat. You will be surprised by the number of popular sweet treats that are vegan.

Some examples of vegan candies and chocolates include Smarties (known as Rockets in Canada), Swedish Fish, Oreos, Airheads, and Jujubes. Most dark chocolate is vegan, so dark chocolate lovers can enjoy their favorite bar without any guilt ( in terms of veganism and calories too).

We highly recommend following this PETA list that mentions all the popular brands of sweets in detail. And lastly, for stricter vegans, we have a few brands that make delicious mouthwatering candies with vegan ingredients, organic raw materials, and sustainable practices. You can consider opting for the following Gusher substitute candies:

What are Fruit Gushers filled with?

With the limited information available through the company, it is hard to say where Gushers land on the sustainability radar. But it might be possible that the company may use raw ingredients produced or sourced in a non-sustainable way.

Yes, Fruit Gushers are gluten-free as the candy does not contain any primary gluten in the recipe. Most sweets are gluten-free except for "Twistables," which have wheat listed in the ingredient list.

We hope our detailed study on the Gushers' ingredients gave you a clear idea about the products' place in the vegan world. The candy is vegan for vegans who refer just the ingredients, but the case can be the opposite for hardcore vegans.

We recommend all newbie vegans to inculcate the habit of deep diving any products' ingredient list before consuming.

Are you a vegan? What do you think about this candy? Be sure to share your thoughts!